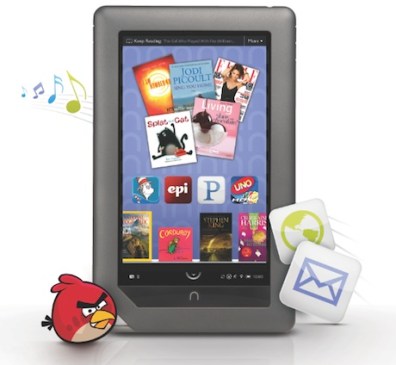 Nook Color owners are in for a treat today, as Barnes & Noble has finally rolled out its long-awaited update that will transform the e-reader into an Android tablet with apps, Flash and a slew of other new features.

With today’s update, the Nook Color is now a compelling $250 tablet, as well as a competitor to other e-readers like the Kindle. It also makes Barnes & Noble the company behind the cheapest tablet on the market, and it sets the bar for Amazon’s potential tablet, which is expected to roll out later this year.

The update upgrades the Nook Color’s operating system to Android 2.2, which brings with it speed improvements and bug fixes. But even though it’s running a new version of Android, the Nook Color doesn’t have access to the entire Android Market (something that B&N has stated previously). Instead, there’s a curated app store that has around 125 apps so far, including Angry Birds, Pulse (a popular news reading app), and Epicurious. There’s also an e-mail application.

B&N only made the Nook Color software development kit available a few months ago, which lets developers create apps for the device. I suspect we’ll see even more apps appearing now that the tablet update is finally released.

The Nook Color also now supports Flash in the web browser, as well as in over 225 digital books and 150 digital magazines and newspapers, where Flash is used for interactive features. The update also brings support for Adobe Air, Adobe’s Flash-based application platform, which means we may soon see plenty of Air-based applications and digital magazines on the Nook Color as well.

While Barnes & Noble is late to tap into the Nook Color’s tablet potential, it’s certainly better late than never. I suspect the company was in a mad rush to deliver the Nook Color before the holidays last year, so the cool tablet features we’re seeing now didn’t have a chance to make the cut. With Amazon rumored to be working with Samsung on a color e-reader/tablet hybrid of its own, it’s going to be an interesting year indeed for the ongoing battle between the two companies.