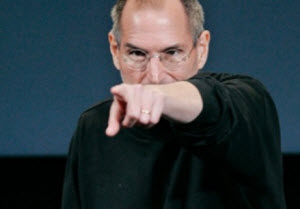 Apple chief executive Steve Jobs said that Apple doesn’t track its users, based on an email sent to a MacRumors blog reader.

The blog’s unidentified reader asked Jobs in an email if Apple tracks its users. The question came up because researchers discovered last week that iOS devices track a user’s whereabouts and stores it for a considerable period of time.

We’re checking with Apple to see if the email is authentic. The user reported the following exchange:

“Steve,
Could you please explain the necessity of the passive location-tracking tool embedded in my iPhone? It’s kind of unnerving knowing that my exact location is being recorded at all times. Maybe you could shed some light on this for me before I switch to a Droid. They don’t track me.”

And Jobs allegedly wrote back:

“Oh yes they do. We don’t track anyone. The info circulating around is false.”

The conversation sounds true, only because Jobs loves to point fingers at the foibles of competitors as he defends Apple. Experts believe that Apple isn’t actively tracking its customers, but members of Congress have written Jobs to ask him if the company is doing any tracking.

Developers Alasdair Allan and Pete Warden brought the tracking issue to light last week at the Where 2.0 conference in San Francisco. Allan said he stumbled upon the tracking file while looking at iTunes backup files on his computer. The file contained thousands of datapoints of geographical coordinates and timestamps.