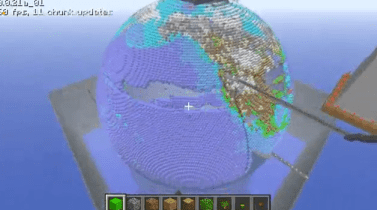 Minecraft is an important independent game because it is so wildly successful and it was released without a publisher. The game has sold more than 1 million copies and raked in some serious cash for Persson, who goes by his online handle “notch,” and the rest of his team. It’s always been about player-created content, but now the game is going even further than that to promote its development community.

“Mod” communities — large groups of people who dabble in changing and adding new content to existing games — typically end up promoting an even more fervent and devoted player base for games. Some games have entire websites devoted to modifications, like BioWare’s Star Wars Knights of the Old Republic series. One of the most wildly successful online games in history — Defense of the Ancients — even started off as a modification to real-time strategy game Warcraft.

Like other games, Persson is requiring mod developers keep the game free and not sell their mods for the sandbox game. The modifications also have to only be available to players that have bought a legitimate version of Minecraft. Teams looking to develop mods only have to acquire one license for a development version of the game — which will now be free, even though Persson originally planned to charge for the license.

“In the long-term, we hope this means people will do awesome new things with the Minecraft engine and play around with it,” Persson wrote in a blog post.

Persson said the team might move to create an online marketplace for some of the more popular mods for Minecraft. As with most mod deals, the team reserves the right to pick up ideas from more popular mods and integrate them with the core game.

While Minecraft is already beloved in independent game development circles, adding a mod community would only cement its position as one of the top indie games of recent time. The game involves dropping players on an island filled with mountains, caves, animals and monsters and setting them loose to create whatever they want. Players find various types of materials that let them build anything from houses, to armor, to pick axes and farms.

Instead of using publishers, Persson relied on viral communities to spread word about the game. It spawned a number of online communities, such as one on Reddit. The game even has its own Wiki, because of just how many things players can do in the world. But Persson said he doesn’t have any plans to go the entrepreneurial route, like Mark Pincus once took when founding Zynga.

The game exploded in popularity because it’s easy to create incredibly complex objects within the game world thanks to the building mechanics and the “Redstone” material in the game, which generates an electric current. Players have built some crazy things within the Minecraft world — from a completely operational computer to a scale representation of the earth.

Success like Minecraft is hard to come by, and usually takes a little bit of luck and some counter-intuitive strategy — like releasing a half-finished game and letting a community play-test it, Persson said in a question-and-answer session on news aggregator Reddit. That’s what made Zynga able to quickly release several games and promote them. But as Minecraft goes, so does the rest of the independent game community — so it’s pretty likely we’ll see more games open up their code for custom modifications.