Google has released a slick new Android application for Google Docs that makes managing documents easy and adds the ability to convert words in images into editable text.

Editing documents is still done exclusively on the web, but the added functionality provided by the native Android app greatly improves the user experience of Google Docs on mobile devices.

Google also acknowledges that documents are meant to be shared and thus has added support for widgets that access stored contacts easier. It’s these kinds of improvements that could reasonably lure people away from using traditional office suite software.

But perhaps the most notable addition is the new ability to convert words found in images into a document with editable text via Optical Character Recognition (OCR). This feature breathes new life into printed text and may prove deadly to old-school book stores that invite customers to lounge around sampling books and magazines. After all, customers can now simply take a picture of a particular article or book passage and convert it into text to read later, all without having to pay the book seller.

The Google Docs app is consistent with the company’s overall strategy to attract new users by seamlessly integrating all of its services into the Android platform, which many have said makes Android devices more desirable than the competition.

Currently, the Docs app is only available to devices running Android 2.1 or higher. But even if Google makes a version available for other platforms, don’t expect the same user experience (e.g. Google Voice for Apple’s iOS). 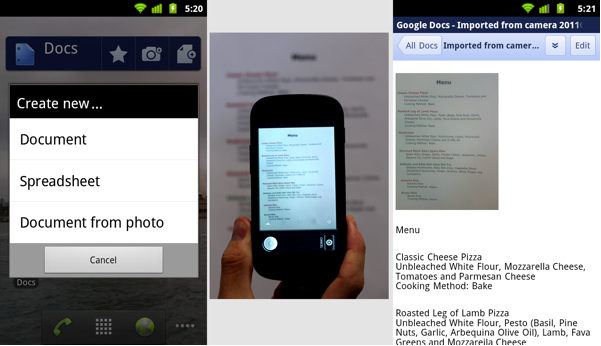