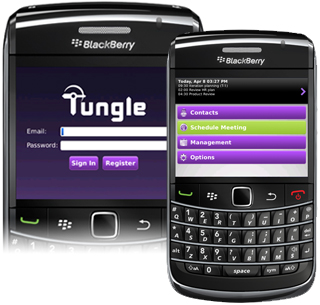 BlackBerry maker Research In Motion (RIM) announced this morning that it has acquired Tungle.me, a calendar scheduling application, for an undisclosed sum of money.

Tungle.me, which launched at DEMO in 2007, offers a service to synchronize and schedule meetings across various calendaring applications — including Microsoft’s Outlook, Google Calendar, and Apple iCal. Additionally, it helps prevent timezone and double-booking conflicts, and integrates with devices such as Apple’s iPhone and RIM’s own BlackBerry.

The service has managed to build a fair amount of traction since launching, currently put into use by 40 percent of Fortune 1000 companies and over 800 universities around the world.

While RIM has yet to mention what it plans to do with the service, the company is most likely going to keep it running in its current form, going by its similar past acquisitions of Gist, an e-mail contact manager, and DataViz, a document platform for Outllook.