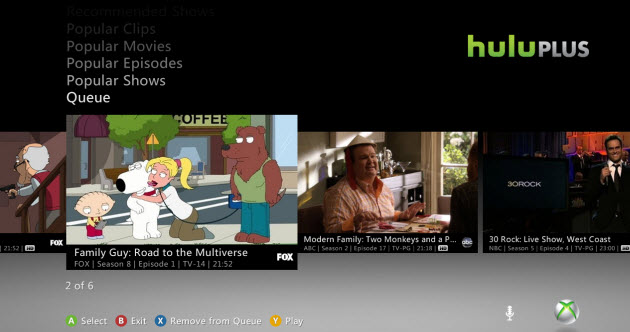 Microsoft is adding Hulu Plus to the Xbox Live online gaming service on Friday, expanding the system’s entertainment options in a very good way. Users who pay $7.99 a month can get access to the streaming movie and TV show service of Hulu via the Xbox 360. 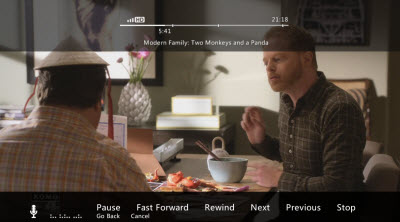 The new system works with Microsoft’s Kinect motion-sensing system, allowing you to speak voice commands or wave your arm in the air to pause, fast forward, rewind, or play a Hulu Plus show.

That’s nice, but the functionality is pretty much the same as with the previously launched Kinect-based Netflix service and the Zune videos service on the Xbox 360. On the one hand, we’ve seen this before and it’s not a novelty anymore. On the other, it’s smart for Microsoft to make motion-sensing and voice commands consistent across different video services.

Playing and controlling a movie using the Kinect user interface is kind of neat, but it’s also slow. That’s because Kinect makes you hold your hand up in the air until it clearly recognizes the gesture and verifies that you aren’t making a gesture inadvertently. You hold your hand on top of a circle overlay on your screen in order to select a video. That takes precious seconds to complete. By contrast, I can use a game controller to make changes to a video, such as pausing it, in a fraction of a second. The voice-control feature of Kinect — which has multiple microphones and can discern voice commands — seems to work a little faster. But you still have to semi-shout the word “Xbox” before you can issue a command such as “Pause.” Sometimes the voice command doesn’t work.

Hulu Plus itself is a good addition to Microsoft’s Xbox 360, which has become a full-fledged entertainment gateway. With Hulu Plus, Microsoft offers more options to its 50 million-plus Xbox Live members. Hulu Plus allows users to watch TV shows from ABC, Comedy Central, Fox, NBC, MTV and others. The first week of service is available for free.

Hulu Plus offers both hit TV shows and classic movies in high-definition streams, including current season episodes of shows like Modern Family, 30 Rock, The Daily Show with Jon Stewart and others. You can also see back seasons of shows such as Lost or Battlestar Galactica.