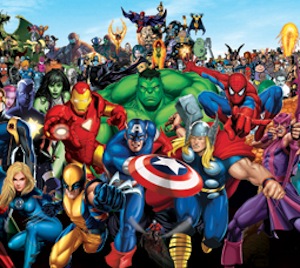 Considering the value of Marvel’s intellectual properties, a free-to-play business model for Marvel Universe Online is a bold strategy for the company because it means missing out on revenue from subscription fees and expansion packs.

Some of Marvel’s most loyal customers already purchase several comic books that average $3.99 each per month — an amount comparable with most monthly game subscriptions. So, it’s not unreasonable to believe Marvel would have a built-in user base if it followed Blizzard’s pay-to-play strategy for World of Warcraft, which generates billions of dollars each year.

Marvel has definitely examined pay-to-play options in the past, however, and determined it was not a good fit. The company terminated its first attempt at creating an MMO with City of Heroes developers Cryptic Studios in 2008 and signed a 10-year deal with Gazillion the following year.

Similar to the business models of games like Farmville, Marvel’s MMO will generate some of its revenue by allowing players to purchase virtual goods that have value within the context of the game, according to Gazillion Entertainment President and Chief Operating Officer Dave Brevick.

But, don’t expect Marvel Universe Online to bear any resemblance to Farmville or Mafia Wars. Brevick’s industry credits include Diablo and Diablo II as well as 20 years of work in the gaming industry. At the event, he said the game will be a legitimately free experience that will also be  “…AAA (triple A), high-quality, high-production value experience that is very accessible.”

As for the game play, users will navigate through a vast, detailed environment recreated from Marvel’s most popular stories. And unlike DC Comics’ DCU Online game, for which players create a custom character, users will choose to play as one of several classic super-heroes, like Spider-Man, Captain America, Iron Man and more.

Initially, the game will only be available for PCs, with support for other platforms to be announced at a later date, the company said. Marvel declined to comment on whether it would debut clips of the MMO at this year’s E3.