If you're preparing to send your PlayStation 3 to the gallows, be sure to keep in mind the console's useful ecological applications such as doorstop, oddly shaped scarecrow, and waffle iron. 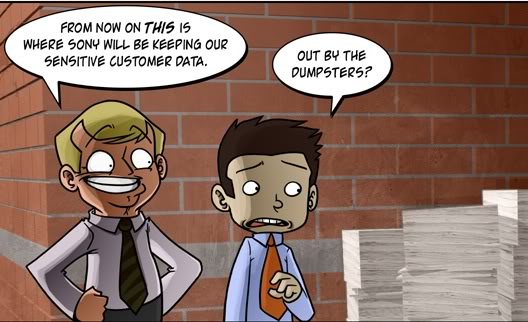 A new survey reveals that one-fifth of PS3 owners in the U.S. are considering swapping to the Xbox 360 as a result of Sony's PlayStation Network woes. Conducted by website CouponCodes4U, the survey pooled 2,132 participants across the country "in order to assess gamer attitudes towards the affair." Data attack: Of the 41 percent of respondents who own PS3 consoles, 89 percent expressed concern over their personal data being stolen, 65 percent had their trust in Sony "greatly affected," and 21 percent stated they were ditching their PS3s for the Xbox 360. I hope Family Feud exploits this data for a potential "corporate seppuku"-themed episode. [GamePolitics]

Sony claims that credit card data stored on the PSN was fully encrypted. Senior Corporate Communications Director Patrick Seybold, who penned the fateful Tuesday PlayStation Blog post announcing the data theft, updated customers with a Q&A that sought to clear up certain aspects of the debacle. "All of the data was protected, and access was restricted both physically and through the perimeter and security of the network," Seybold explained. "The entire credit card table was encrypted and we have no evidence that credit card data was taken. The personal data table, which is a separate data set, was not encrypted, but was, of course, behind a very sophisticated security system that was breached in a malicious attack." Do you smell that? I think it's Sony's pants catching on fire.

The Knights Templar has demanded the German government to "ban the manufacture and distribution of computer games with negative content." The order, named (deep breath) the Ordo Supremus Militaris Templi Hierosolymitani Grand Priory of Germany from the North Rhine-Westphalia, Viersen, felt "brutalizing computer games" like Grand Theft Auto and Resident Evil negatively affect youth and instead wished to see the "production of computer games with positive and meaningful educational approach." The message is clearly nothing new but the source? It's the freakin' Knights Templar. Altair and Ezio were contacted for comment but could not be reached as of this writing. [Golem.de]

A new patch released for Fallout: New Vegas has reportedly broken the game for Xbox 360 players. Developer Obsidian Entertainment released patch 1.3 to pave the way for the upcoming Honest Hearts DLC while implementing a range of weapon balances and fixes. Alas, it also appears to have sterilized the save files of some Xbox 360 players in addition to causing irregular crashes. "Great, get the day off, settled down in front of the Xbox to play New Vegas and guess what, it freezes. Thanks Bethesda!" wrote a user on the game's official forum. "As with everyone else, the new update has wrecked my game, got the warning about losing content and now it won't load up my past saves — well that was time well spent (assuming you can argue playing games even is time well spent)."