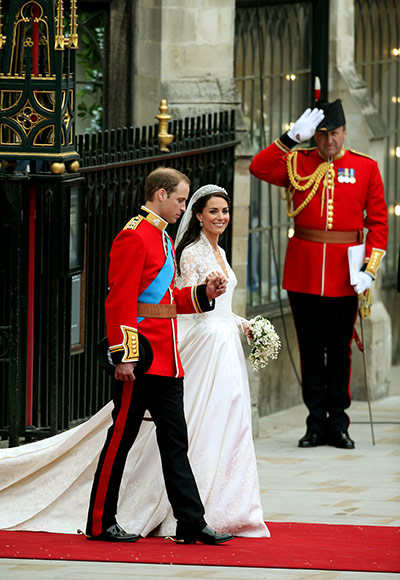 Most of the world should have been asleep when the British royal wedding took place today, but the event still took over the entire Internet.

In the UK, mobile carrier O2 rolled out additional base stations to deal with the extra traffic. According to The Register, O2 expected an average of one call and four text messages for each of the 300,000 customers lining the streets and crowding in front of Buckingham Palace, and it expected that 65 million images of the event would appear on social networking sites.

Of course, this was dwarfed by the audience watching online. Yahoo told us that by 11:00 AM this morning, Yahoo had already sent 14 million clicks to its Royal Wedding coverage and the top two stories (“the dress” and “the kiss”) have driven more than 6 million clicks combined. Requests per second have surpassed previous records set by the Japan Earthquake (40k per second at today’s peak, compared to 33k per second).

Yahoo’s video traffic for the Royal wedding generated record traffic for a live video event on Yahoo, eclipsing the previous record set by the Michael Jackson funeral by 21 percent. Mashable also reports that Akamai, which handles a significant portion of global web traffic, said the number of concurrent live streams on its servers surpassed the 1.6M peak set by the World Cup in June of 2010.

All of the top 10 Twitter trending topics during the event were related to the royal wedding from #sarahburton” (the designer of the wedding dress, a closely guarded secret prior to the event)  to #casamentoreal (royal wedding in Spanish).

Finally, the wedding dress was a triumph, and David Beckham looked very handsome.