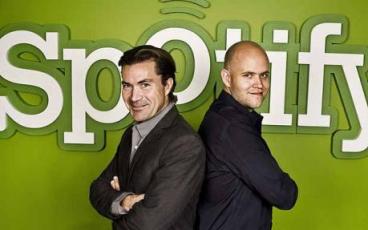 Spotify CEO Daniel Ek today refuted the rumors (reported by TechCrunch and others) that the Swedish streaming music service had negotiated a number of deals with major movie studios to stream their content. On his Twitter stream Ek said, “Soon I’ll be reading that Spotify is launching a space rocket.”

Possibly in anticipation of the long-awaited U.S. launch, Spotify recently announced changes to the service that reduce the number of listening hours available per month to free users and the number of times that tracks can be played.

On a side note, I recently asked another Swedish music startup founder, Alexander Ljung of Soundcloud, why so many music startups come out of the country. “There’s been a lot of quite successful music artists from Sweden. That comes partly from the fact that there’s a lot of music education in school,” he told me. “It’s free to learn instruments. Almost everybody I knew was learning at least one instrument. And then it’s dark 6 months of the year.”

Spotify is based in Sweden and has 10 million users around the world (1 million of which are paying subscribers), mainly in Europe. The company has received funding of $120 million and is valued at around $1 billion.