What is the difference between 'core' gamers and 'casual' gamers? I consider myself to be a core gamer yet I only play games maybe 5-10 hours a week; does that make me a casual gamer? Other than the fact that I think most people who consider themselves to be core gamers look down on casual gamers and blame them for the dirth of poorly made games flooding store shelves, is there really a difference? I recently did a study on video game platform choice for my honors thesis, and while the difference between these two groups wasn't it's focus, I did learn get some interesting numbers so lets take a look.

The first thing I thought of when I considered the difference was that obviously, the amount of time a person spends playing games is the difference. Casual gamers only play to waste some time on Farmville or Wii sports while core gamers must burn tons of hours hitting the level cap in World of Warcraft or Call of Duty. My study showed that people who reported themselves as casual gamers (N=72) spend 11.25 hours playing games each week on average while core gamers (N=293) spent 19.55, looks good so far.

Both of those numbers represent a lot of time with games, and I don't think they're enough to separate the two groups definitively; what else is the difference? While I didn't look at some other factors that I think should be part of the classification process like amount of money invested in games, turnover rate of games, profficiency achieved with games, and length of time playing games (have you played for two months or eight years?), I did ask respondents for some other information; their three favorite games and their primary platform. This should be useful since I casuals only playing Animal Crossing or Bejeweled on the Wii… right?

There should be a big difference in the types of games each group plays though, right? As things turned out, there were only a few instances of the 196 favorite games listed where casual gamers named things like Wii Sports or Solitaire as their favorite games, the majority were M rated games like Borderlands, Dragon Age, Red Dead Redemption, or Call of Duty. The core gaming crowd had perhaps more 'casual' games than the casual crowd did, although both tended to identify time consuming or T/M rated games as their favorites.

Maybe we need more classifications for gamers, or maybe labeling people isn't the right thing to do. Who knows, but I think that research into gamer self-classifications could make for some interesting research and a good addition to the literature as a basis for other researchers. So hop to it all you students out there! I love games and the culture that comes with them (mostly), I think I base my self-classification as a core gamer partly on that love and the history that I have with games, regardless of the amount of time I spend actually playing them. What kind of classifications do you use, and how do you define each group and yourself? Let me know in the comments! 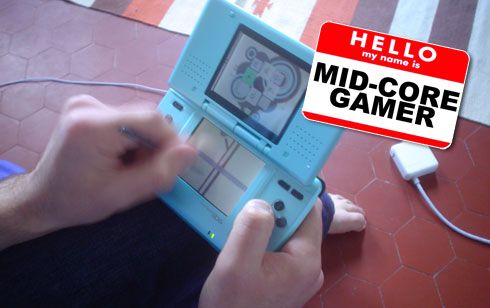 Notes: My sample came overwhelmingly from Bitmobbers and the penny pinchers over at www.cheapassgamer.com which might have skewed my casual gamer group. I'll be posting a few more articles with findings from my research and tips for students who want to work in the video game industry so be on the lookout!