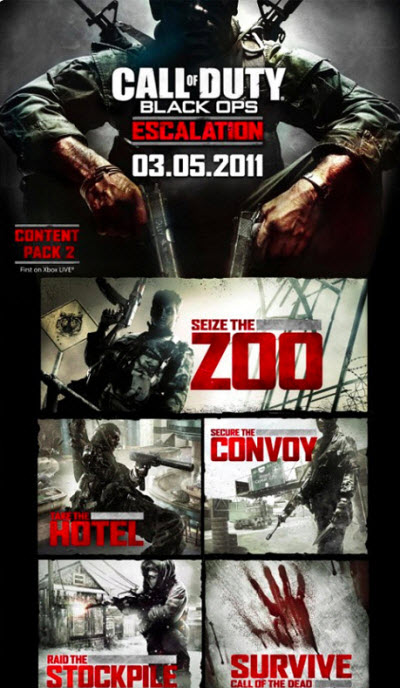 While Sony writhes in agony over its PlayStation Network outage, Microsoft’s Xbox Live online gaming service is about to launch another exclusive coup: the latest map pack expansion for multiplayer gaming in Call of Duty Black Ops launches on Tuesday.

Activision Blizzard’s latest map pack is the second release of   downloadable game content for Black Ops. And as past map sales have proven, this launch will likely generate as much revenue as a new blockbuster game launch on the consoles. Given the timing, Microsoft’s Xbox Live is going to be a big beneficiary of the map pack release and the Sony outage.

Activision Blizzard has said that users have played the Black Ops game online for more than 2 billion hours since its launch in November. You can expect more Call of Duty fans to log into the Xbox Live service starting tomorrow, since they won’t be able to play on the PSN or on Sony Online Entertainment’s PC online games, which were shut down today pending an intrusion investigation.

I’ve actually put more than 60 hours into the multiplayer combat version of the game, which is second to none, in my opinion. I’m at the equivalent of level 88 (since you can get up to level 50 and then start over again). More recently, I’ve stopped playing and am happy to pick it up again now that a new map pack is out. In that respect, Activision Blizzard has timed this launch of new content well, as it will bring back players who have stopped playing the game.

The new map pack will have five maps, entitled Zoo, Hotel, Convoy, Stockpile, and the zombie map Survive. The price wasn’t listed, but previous map pack First Strike was sold on Xbox Live for 1200 Microsoft Points, or $15. (See the smack talk from EA’s chief executive about Call of Duty). First Strike sold more than 1.4 million copies on Xbox Live on its first day of sales.

Call of Duty Black Ops is one of the best-selling video games of all time, with sales of more than $1 billion since the launch in November. Activision Blizzard previously launched its First Strike map pack in February.

As we noted before, if video games are the new Hollywood, map packs and downloadable content are smart ways to satisfy the insatiable thirst that some gamers have for sequels. Instead of coming years later, though, these downloadable expansions to existing games keep players addicted to a recently released title.

Activision Blizzard said some time ago that it had sold more than 20 million Call of Duty map packs, generating more than $300 million in sales. So it’s clear that map packs are a big business, and video game publishers may want to avoid publishing rival games on May 3, since gamers will be a little busy.

On the weekend of May 6, Black Ops players can earn double the amount of experience points in each match they play.