Thanks to American Express OPEN for sponsoring this post as part of the Big Break for Small Business program. Click here for more information about the program. 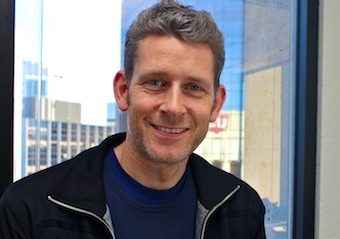 What inspired me to start VentureBeat? Lack of inspiration. Almost five years ago, I’d reached a point in my career as a writer where I realized I needed to inspire myself again. Old media, with its broken business models and glacial pace had become a lifeless, fearful place. Management would send cryptic messages about how bad business was, and they’d swing the axe again and fire another ten percent of the newspaper staff. I was also deeply ambitious.

The idea to start my own business and technology blog capturing the heartbeat of the Valley began to take hold. As a reporter and columnist for the San Jose Mercury News, I’d been blogging religiously on venture capital and technology since 2004. By 2006, I realized that few others were reporting with equal depth or velocity on the entrepreneurial scene. Readers thirsted for knowledge about the new technologies that arrived with Web 2.0. And finally, the great entrepreneur dearth of the post-bubble era transitioned to an age of teeming activity. A new breed of angels began investing in them. Stories about all this needed to be told.

I also wanted to restore vibrancy to the conversation, something that increasingly seemed lost at the newspaper. I still remember the days when after writing a big newspaper article, the only way I’d know it hit a vein was when I got emails from readers. With no blog, there were no “comments,” only emails. But even these email comments began to trickle off, because readers were no longer patient enough to email in a comment. They were already moving to blogs, as I’d noticed when I saw the comments from some of my friends who were early to blogging, such as Om Malik, of GigaOm. I wanted to bring the magic of community and great reporting together in one place. I believed this sort of reporting would be a game changer. Clear writing, and the responses in comments (a form of fact checking and dialogue) would help readers get more from the content.

As I planned over the summer of 2006 to launch VentureBeat, I was pretty clear on its focus. As a writer, I’d been thinking long and hard about what I was interested in, and how I could make a difference. Why not bring the aforementioned reporting style to help readers make better technology and business decisions? If I could help spur the ongoing conversation about the startup ecosystem, write engagingly about the the Silicon Valley dream of leveraging technology for investor return, and thus participate in the magic that actually does change lives for the better, what more could I hope for in a vision? It was pure.

Next, was the “how.” New technologies allowing the democratization of media had arrived on the scene, such as blog tools like WordPress. For almost no cost at all, you could access design tools that enabled a web site front page that was every bit as professional and lavish as the front page of any leading newspaper site, be it the Mercury News or the New York Times. It also wasn’t too complicated to buy a few servers, and a URL, and the other things to run a small business.

Finally, and probably the biggest challenge was the business side. How to make money? I was afraid. I launched without fully knowing where I was going to get cash, and whether the ad per page view model would work. I launched with a hunch, basically a prayer. On my own in September 2006, and working almost 24/7 (I actually did sleep about 4 to 5 hours a night, and would take afternoon cat naps to recuperate), I worried that I’d find myself dead in an alley from exhaustion, or that my blog would be a disaster. I worried that I wouldn’t be able to keep readers coming back. I refused calls from well-meaning folks from the media and PR wanting to write articles about VentureBeat in their own blogs; I just wouldn’t talk about it. Looking back, I probably should have been more confident and taken everything I could get. But you make silly decisions when you’re afraid. I told them I’d adopted a “let’s just wait and see” approach. “Look me up next year,” I said to them. I told my family that I’d hire somebody to help me by the end of the 2006. It didn’t happen.

In fact, I blogged alone for more than a year. It was the most adrenalin-fueled era of my life. I was crazed. A complex concoction of emotions — panic, ambition, desperation — drove me to my computer as soon as I woke up in the morning, and I’d find myself typing and reading late into the night. I did take on a couple of freelancers in 2007, but didn’t actually hire anyone until I’d raised a small amount of angel funding ($300,000) in December, 2007. Finally, I felt some relief. Page views, already rising, began to take off. Advertising grew along with it.

By early 2008, the momentum was enough to make me realize we hadn’t, and wouldn’t fail. Sure, things are so tumultuous in the media world, advertising so finicky, and our business so fledgling that we were by no means out of the woods — and wouldn’t be for some time. But it was impossible not to notice the successes. The New York Times reached out and asked if they could syndicate our content, and they wrote a post about us when they did, calling us “one of the best blogs” on the Web. We’ve since signed a series of other partnerships, too, and page views and business has continued to grow each year for the past three years. Instead of going up against a force-17 cyclone, it now even feels like we have wind at our back.

I’ve never been more confident about our business than I am right now. We’ve recently been able to hire some awesome team members, giving us a more professional leadership. And we’re looking to hire some more writers. And we’ve got all kinds of new ideas and plans going forward. I can’t wait to see how they unfold. But what I can say is that I’m sure glad I took that dive in 2006  — even without any guarantee there’d be a rip-cord. There’s nothing quite as exhilarating as entrepreneurship.