Redwood City, Calif.-based Kabam has the ambition of becoming bigger than the console game companies by making sophisticated hardcore games on Facebook, whose audience has mainly enjoyed casual games in the past. But the social network is so big now that its hardcore audience is huge and under-served.

Global Warfare is a “massively multiplayer social game,” where users can band together in groups of 100 to establish city-based empires that fight with each other for control of key resources and territories. The game is similar in style to the company’s other multiplayer strategy games: Kingdoms of Camelot, Glory of Rome (which we just reviewed), and Dragons of Atlantis.

But this one is set in the near-future world of warring city states, and it takes the quality up a notch. Since Facebook is a limited game platform, pushing quality higher is easier said than done, since you can’t really use console-like graphics without bringing the platform to a crawl. 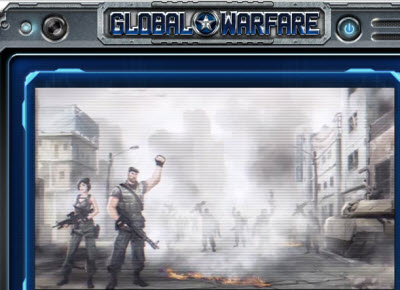 This game, for instance, has “cut scenes,” or the cinematic storytelling trailers that are interspersed between game play sessions in console games. But the cut scenes aren’t over the top 3D animated productions. Rather, you see a still figure such as the character on the right and you hear a voice over. A camera pans over the character, Ken Burns style, and you get a mission assignment. The user interface is also much better than past games.

Kevin Chou, chief executive of Kabam, said in an interview that this kind of improved game play is part of the company’s ambition to challenge Activision Blizzard and Electronic Arts for the time of hardcore gamers, or those that want to be but don’t have the time. Kabam’s users play an average of six or seven days a week for four hours at a time.

In the game, you build your own city (pictured below), as you do in games such as Glory of Rome. Then you have to build your resources, defenses, and offensive military might. You get a seven-day grace period to build up and join an alliance. Then you enter the free-for-all combat, where anyone can attack you. 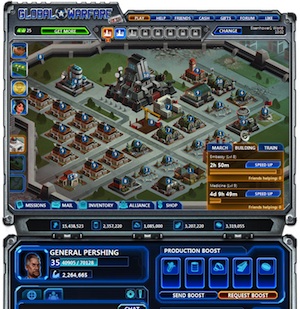 In contrast to Glory of Rome, however, this game takes the multiplayer combat in a more sophisticated direction. For instance, key resources will spawn in a random location. All sides will have to fight for control of the resource and then use it to build key defenses or weaponry. Then it disappears and reappears in another location. To control the territory and the resources requires a lot of coordination and diplomacy with other factions.

Bryan Bennett, general manager for Global Warfare at Kabam, said in an interview that the game uses the same engine that Kabam built for its other games. But it has been reskinned for an age when government has fallen apart and different factions with modern weapons are vying to rebuild society.

“This is our first attempt to push the quality up a notch,” Bennett said.

This new game includes “crafting,” or using resources and artifacts harvested from the environment and turning them into new research creations. Rather than barbarian camps like in the Rome game, the cities are surrounded by wild environments that include terrorist camps. The valuable resources include titanium, graphene and uranium. The battle to control these resources leads to more “alliance on alliance combat,” Bennett said.

The combat is now balanced in a “rock paper scissors” style, where a tank is effective against infantry but not against aircraft. That makes it much more like a real-time strategy game on the PC, such as StarCraft 2. The combat plays out in real time, but you don’t see the actual combat take place. Instead, you send your troops to a location and then find out the result of the battle through a still screen. The battles are synchronized across the game world, so that 100 players could send their armies to attack the same spot at the same time, resulting in a massive battle. Over time, Kabam plans on offering more visual rewards for combat.

The game also has two kinds of experience systems. XP stands for experience and you can get more of it every time your troops fight. Power, on the other hand, is your military might, which fluctuates with the growth or loss of you military power. With this system, players don’t have to worry about losing status if they fight and lose.

I’ve noted how Glory of Rome lacks some very basic tutorial information, like how to fight. But Global Warfare has a more advanced tutorial system that is aimed at attracting neophyte players and keeping them on board, even though the game is likely to be played first by lots of die-hard Kabam fans.

You can get used to seeing this kind of higher-quality Facebook game from Kabam, which raised $30 million in funding in January and now has 400 employees. Bennett said it took longer to make Global Warfare, and it will likely take a lot longer to make future Kabam games as the quality becomes better and better. 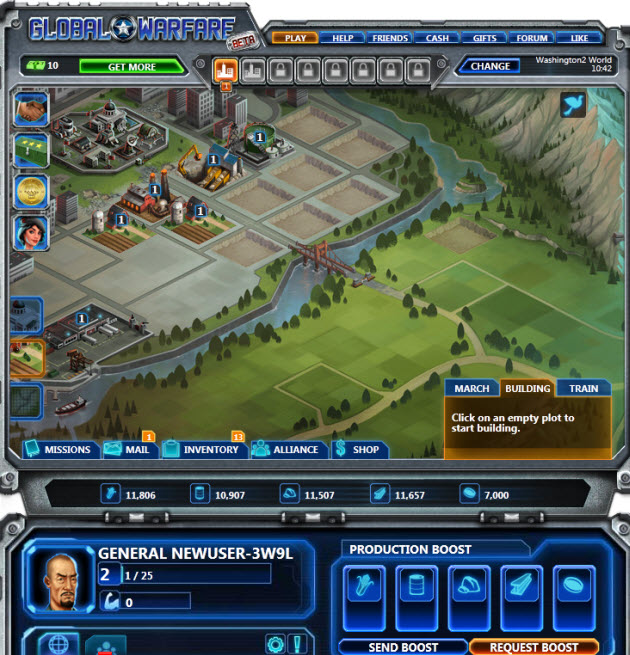