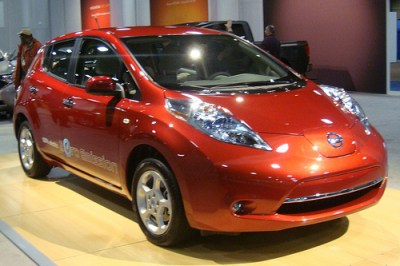 Nissan’s plug-in electric car, the Leaf, outsold General Motors’ Volt electric car for the first time in April — the first results of Nissan aggressively expanding its production of the Leaf to meet an almost insatiable demand for the electric car.

It’s an accomplishment for Nissan, which regularly faces hurdles in bringing its Leaf to the United States. The company said it is on track to deliver 20,000 Nissan Leaf cars to people who have reserved them by September. But that’s because GM said its Volt sales would likely be lower because the company was shipping more cars to dealerships as demonstration models to bring in new electric car buyers. General Motors has also shipped around 1,700 Volts since the vehicle went on sale last year, while Nissan has shipped around 1,000 Leafs.

Electric car buyers usually have higher incomes, so the higher price tags for the cars typically haven’t been an issue for those looking for an electric car. Leaf owners are in the top 15 percent of households with regards to income, according to Nissan. Both Nissan and General Motors are trying to produce electric cars with broader appeal by slapping smaller price tags on them, but it’s resulted in demand that the car manufacturers just can’t keep up with.

GM said it expects to ship around 10,000 Volts this year, while Nissan has said it will ship around 20,000 Leafs by September. The U.S. government has set ambitious targets for both the Volt and Leaf, based on its goal of having more than 1 million electric cars on the road by 2015. The U.S. government expects GM to sell around 500,000 Volts by 2015 and Nissan to sell 300,000 Leafs by 2015, according to the report.