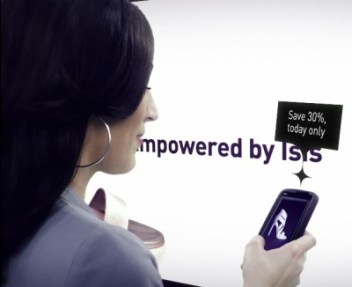 When it was announced in November, the Isis mobile commerce network seemed like a bold attempt by wireless carriers to edge out credit companies on mobile payments.

Now the carriers behind Isis — AT&T, Verizon and T-Mobile — have lowered their ambitions and are looking to partner up with Visa and MasterCard, the Wall Street Journal reports.

The news is a sign of the growing importance of mobile payments in the next few years. Clearly, the carriers behind Isis are desperate to get a mobile payment system going sooner, rather than later.

Instead of the carriers building their own payment network from scratch, which would have allowed them to collect fees with every transaction, they’re looking to create a “mobile wallet” that would store consumers’ existing credit card information. That would basically make paying for something with your phone no different from swiping your credit card.

Sources familiar with the situation tell the WSJ that it would have been too difficult for the carriers to build their own network, and that they’re in talks with Visa and Mastercard to ensure a large amount of carriers when the Isis mobile wallet launches. Discover — the original partner to handle payments for Isis — is still on board with the revamped plans, an Isis representative said.

It’s unclear how the carriers plan to make money from Isis without having full control of the payment network. According to the WSJ:

One option is a “pay-to-play” program that would charge card-issuing financial institutions to piggyback on their technology, people familiar with the matter said. Another is coupon-style offerings that would allow the carriers to take a cut of the revenue made from special offers served up to mobile payments customers, the people said.

Meanwhile, Isis will face stiff competition over the next few years. Google just recently joined the NFC Forum, which will give it some pull when it comes to the future of the technology. Google has also made NFC a key feature in the Nexus S Android smartphone, and it has teamed up with MasterCard and Citigroup to embed the technology in phones.

But the carriers aren’t sitting still with Isis. They announced today that they will launch a pilot program in Salt Lake City, Utah over the next few months, which will make the Utah Transit Authority system in the city Isis-enabled. Retailers in the city will also be equipped to accept purchases from Isis devices.

As the WSJ notes, the move towards a mobile wallet will put the carriers directly in competition with mobile manufacturers over where secure payment data is stored. Carriers want to store that information on SIM cards, while device makers would rather keep it directly on the phone, or on the non-removable NFC chip.