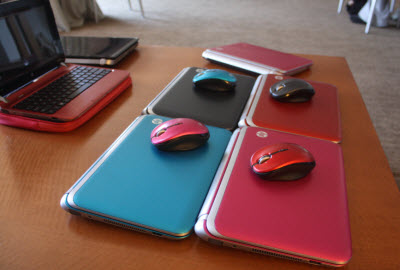 Hewlett-Packard has a bunch of new laptops debuting today with some cool features and a mobile data plan that could prove to be very attractive for road warriors.

For new laptops that come with a built-in wireless area network, such as 3G wireless access, HP is going to offer a temporary data plan that could turn out to be much cheaper than a typical day pass with carriers such as AT&T. These mobile wireless plans can get users access to the internet at a decent speed even if the user isn’t within range of a Wi-Fi wireless network.

Using Sprint’s EVDO network at the beginning, HP is going to offer data plans that cost as little as $5 for five hours of mobile data service, or 75 megabytes of data. The price is $10 for three days or 150 megabyets; $20 for 14 days or 450 megabytes; or $30 for 30 days or 1000 megabytes. Those are pretty good prices compared to what the carriers sometimes offer, and the plans are ideal for people who might have to travel for just a few days but wouldn’t otherwise need 3G service.

The user can also get nationwide access to 3G service and not have to worry about signing up on the spot for a high-priced plan at a particular location during a multi-leg trip. There are no activation, set-up fees, or network contracts necessary. The user can also dial into the service directly from the HP laptop without downloading a carrier’s software. The service will be available on new HP laptops where users pay for the built-in 3G technology, such as the HP ProBook 5330m, the HP EliteBook 2560p and 2760 p, the HP Mini 210, the HP Pavilion dv4, and the HP Envy 14. HP users can also download software to make older models work with the 3G service, as long as they have the built-in hardware necessary for 3G.