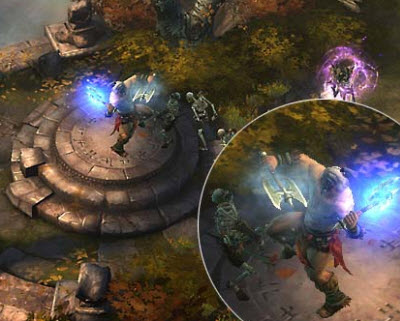 Blizzard Entertainment is still working hard on Diablo III, one of its premiere PC games coming this year, but the company isn’t sure it can finish the game in time to launch it this fall.

Mike Morhaime, head of Blizzard, a division of Activision Blizzard, said during the company’s earnings call today that the company is working hard to get the game done, but it hasn’t committed to a launch date yet. The Irvine, Calif.-based company has been working on the title for years, but Blizzard has a reputation for never shipping a title before it is satisfied with its quality.

Diablo III is expected to be one of the biggest video game blockbusters whenever it launches, much like StarCraft II, which has sold millions of copies in the past year.

Cataclysm generated considerable revenue in the fourth quarter. But Morhaime said that WoW players have blazed through the Cataclysm content faster than Blizzard expected. As a result, the players that have done so have begun to play the game less than would have been otherwise expected, he said. Morhaime said the company is planning to work on more content updates. He also said that, over the long term, Blizzard will likely to do more frequent content updates for World of Warcraft.

Blizzard generated $170 million in operating income on $357 million in revenue.

In China, Morhaime said that WoW players can receive mobile updates on events in the PC game. During the quarter, Blizzard launched the StarCraft II game in China. Blizzard does not release average revenue per user.

Morhaime said that Blizzard is working on the Heart of the Swarm expansion pack for StarCraft II. He said more details will be out about that in the coming weeks. Blizzard is working on a next-generation massively multiplayer online game. According to leaked information, that game is code-named Titan and is scheduled for release in 2013. Blizzard has not acknowledged that information yet and made no reference to such details today. But the company did say it is “scaling up” that next-generation MMO team.

Bobby Kotick, CEO of Activision Blizzard, said that the company remains “platform agnostic” and will invest in all platforms that have users, a display and a microprocessor. He said the company will expand to new platforms over time.