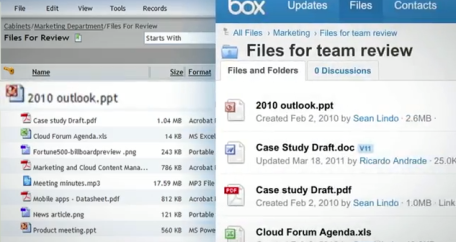 Cloud storage provider Box.net announced today that it is adding an extra feature that will allow users of EMC’s document management application, Documentum, to sync their files to a Box.net public cloud account and modify them like traditional Box.net files.

The company’s web application will basically serve as a front-end access point for the files stored on private servers with EMC’s Documentum software. That means that any changes made to the file on Box.net will automatically carry over to the file stored in Documentum, and vice versa. The idea is to ensure companies that use Documentum give their employees multiple ways to access files stored on in-house servers — such as through a BlackBerry or an iPad.

It does fracture one of the major benefits of in-house servers — which safely store information behind multiple firewalls and are typically protected from outside attacks. Box.net’s servers are secure and follow the same governance and regulatory requirements that major companies that typically employ EMC’s products need, Levie said. But it still might not match the kind of security requirements major companies have to ensure intellectual property isn’t stolen or tampered with.

But this is a pretty significant deal between a massive traditional provider of infrastructure for large enterprises and one of the darlings of the cloud-based enterprise world. The deal could indicate a new trend where some of the more traditional enterprise powerhouses, like Cisco and others, end up making deals with newer cloud computing companies.

“We’re insanely excited because of the credibility that EMC has in the enterprise space,” Levie said. “This does represent the kinds of partnerships that could emerge between [software as a service] players and traditional infrastructure players.”

The deal was a year in the making, with negotiations ramping up in the last three months. Box.net hired former EMC chief marketing officer Whitney Tidmarsh as general manager of the company’s enterprise division and product line last month, which was apparently enough to speed things up and help Box.net and Levie close the deal with EMC. He didn’t disclose any financial details about the new agreement.

Box.net is basically an enterprise version of Dropbox — it lets businesses store documents on remote servers that employees can access from almost any Internet-connected device. The online app also lets employees modify documents and files within the actual storage space without having to download the file. They can also comment on files and changes and use the web app as a way to collaborate with employees on the other side of the country.

The company is still in the process of ramping up its staff and will be moving to a newer office space soon because its staff continues to grow, Levie said. The company recently secured a $48 million funding round that included investors like Meritech Capital and Emergence Capital. At the time, Levie said the company would use the funding to double its sales and development teams and move to an additional office in Palo Alto, Calif.