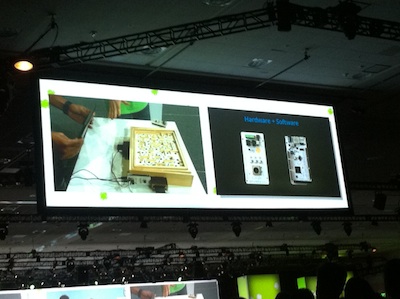 Google has said before that its Android operating system isn’t just for mobile phones, and that’s already become true as the operating system moves onto tablets. The company showed off an even more ambitious vision today at the Google I/O conference in San Francisco, where it announced two new device platforms — the Android Open Accessory Platform and Android at Home.

The open accessory platform looks like a way to control other devices using an Android phone or tablet. Googlers gave a couple of examples today, most impressively a labyrinth tilting game (pictured) that connects to an Android tablet. When you tilt the tablet, the game tilts too. Google said it will be releasing an accessory development kit (ADK) that helps companies create devices that are compatible with Android and offer a seamless user experience.

Android at Home, as you can probably guess given the name, is a similar concept but is targeted at controlling every device in your house. To make this happen, Google plans to release what it’s calling Tungsten devices, which can become the hub of every device in your house that’s connected to Android. Obviously, this is in part a play aimed at controlling your home entertainment system — Google already announced its new cloud music service today, and as part of Android at Home it demonstrated swiping a CD jewel case that’s enabled with NFC technology against a Tungsten device, then having all of the songs uploaded into your home system. Swipe the jewel case again and the CD starts playing.

Android at Home goes even further than entertainment. A Google spokesman said that it could control your home sprinkler system — think of it as FarmVille, but for real life.