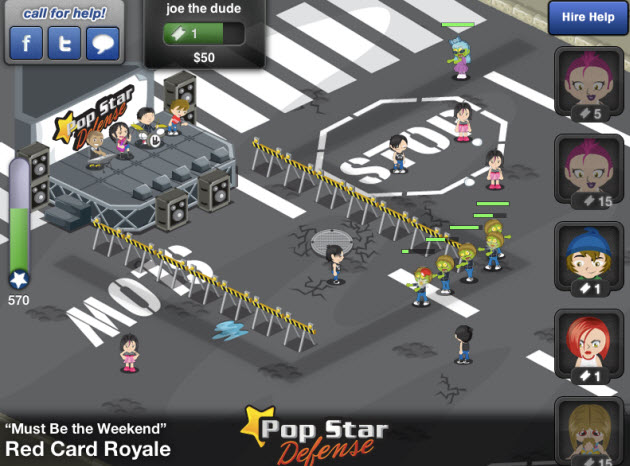 Game Closure is showing off its HTML5-based cross-platform multiplayer gaming technology at the Google I/O conference today. The company is using its own Popstar Defense game to prove that it can make a single game, written entirely with the HTML5 language, that can run on web browsers, iPhones, Android phones, Android tablets and iPads.

The Popstar Defense game is a typical “tower defense” game, where you have to defend rock stars on stage from getting the limelight stolen from some invading rockers. It is a multiplayer game where users can collaborate in real-time, and it uses decent two-dimensional graphics. As many as 2,000 moving objects can be on the screen at the same time.

Because it is written in HTML5, there is no need to download a plug-in to run it in a compliant browser such as Google Chrome. The game uses the same code across platforms, so a developer doesn’t have to do a different version for every new device.  Users can send out simple web links to invite other players to join the game. That’s something that the current generation of Facebook games don’t allow. With Game Closure, developers can write in pure JavaScript and then use standard HTML5 applications programming interfaces. Game Closure’s software development kit will compile, deploy and accelerate the game on a specific device. When the game runs on non-browser platforms like a mobile phone, Game Closure creates a native app technology such as OpenGL. That’s important in order to get a game to run at a much faster speed than is possible with HTML5.

If this sounds familiar, it’s pretty similar to the game plan of Sibblingz, which is also creating a cross-platform game development technology that reaches across more platforms such as the RIM PlayBook or Palm WebOS. Michael Carter, co-founder, said that the company’s strong suit is its focus on real-time multiplayer and seamless developer tools. But the focus for now isn’t really 3D.

The technology was created by Carter, Martin Hunt and Tom Fairfield. All of them have background at game and web startups such as Meebo. After the company first announced the beta technology in February, more than 7,000 developers approached Game Closure.