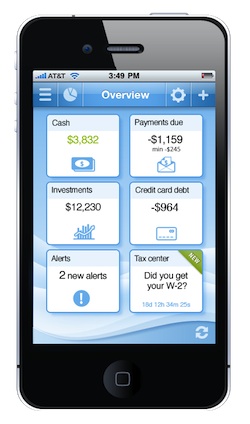 Pageonce, which helps manage financial accounts and bills through your smartphone, just announced that it has raised $15 million in a new round of funding.

It seems like the Palo Alto, Calif. company has become more focused over time. When it first launched a couple of years ago, Pageonce offered a centralized website for users’ online identity, allowing them to access all of their Web accounts in one place. Now it’s all about a mobile app that the company promises will become the “wallet of the future.”

With the Pageonce app, users can track all their money and bills, receive bill alerts, and get the big picture of all their transactions through reports. The current concept sounds similar to popular personal finance site Mint, but a spokesperson argued that the company “addresses a broader audience” because it’s “about simplifying money and bills for daily use for everyone, rather giving lots of granular details, budgeting and goals.”

The company has now raised $25 million. The round was led by new investor Morgenthaler Ventures, with participation from Pitango ventures and Pageonce’s chairman Liron Petrushka.

“The Pageonce ‘wallet’ is a natural mobile play and a great bet to be a financial services category leader,” said Morgenthaler partner Rebecca Lynn in a press release. “With over 4.5 million users, they have already demonstrated a knack for simplifying the complex task of managing money and bills for their users.”