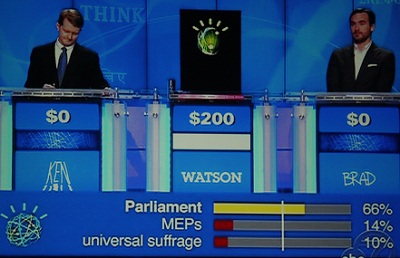 Now that IBM’s Watson computer has defeated human champions at Jeopardy, the company has even bigger plans for its future, according to David Ferrucci, who leads the Watson research team.

I had a chance to interview Ferrucci at a press event last night, where he told me that his team is still trying to improve Watson’s underlying technology, but it’s also looking at ways to turn that technology into a commercial product. We’ve already written about IBM’s plans to bring Watson into health care, and Ferrucci told me the company is also examining how Watson could also be used in the finance industry.

Watson wasn’t designed with any commercial purpose in mind, Ferrucci said — he and his team just wanted to develop the natural language technology that allows Watson to understand and answer questions, and then Jeopardy seemed like the natural place to showcase those capabilities. (For more details about how Watson works, check out this interview with one of Ferrucci’s team members.)

But as he continued working, Ferrucci realized that Watson’s process of coming up with different possible answers and verifying them against a large corpus of data mirrors the medical diagnosis process. So doctors and patients could have conversations with Watson where they discuss the symptoms and double-check diagnoses.

More broadly, the Watson team wants to improve the computer’s conversational and analytical capabilities. “I would love to be able to converse at an intellectual level,” Ferrucci said — for example, he’d like to be able to talk to Watson about Joseph Conrad’s novel Heart of Darkness. Watson will never be able to form an independent judgment about the book, Ferrucci said, but in addition to answering basic factual questions, it could eventually develop an understanding about whether or not you would enjoy it.

Of course, Watson’s victory raises some provocative questions about human and machine intelligence — after all, that’s why its participation in Jeopardy was so fascinating. I’ve been thinking about this since reading Adam Gopnik’s New Yorker article on the subject. Gopnik argued that in order to avoid admitting that computers have become smarter than humans, we have started to define intelligence more and more narrowly.

Not surprisingly, Ferrucci took a more optimistic view. He acknowledged that there’s a “John Henry” perspective on these advancements, referring to the mythical American railroad worker who died trying to compete with a steam-powered engine, but Ferrucci said that’s a very “limiting view.” Rather than worrying about whether machines can perform certain tasks better than we can, he said, “I can’t wait until computers can do more and more things.” By making information more accessible, computers enable more human creativity, which is something they’ll never be able to replicate. “The computer doesn’t have human experience,” Ferrucci said.