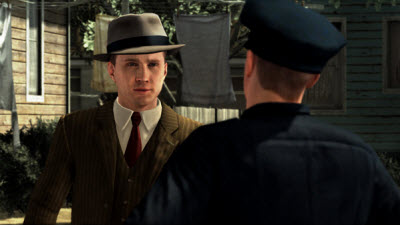 But the action on the big screen, set during 1947 Los Angeles, wasn’t a movie. LA Noire is the latest video game from publisher Rockstar Games. And in contrast to many video games that have forever claimed to be “movie-like,” LA Noire really is movie-like (see video here), from its captivating story to its use of an outstanding new facial animation technology that brings video game characters to life, as if they were actors in a movie.

Rockstar, a division of Take-Two Interactive, is the maker of bestselling genre-defining titles like the modern-day crime drama Grand Theft Auto IV and the western Red Dead Redemption. And the red lipstick murder was an actual case involving the murder of nurse Jeanne French, which remains unsolved to this day.

In the game, players will find the culprit, although the names and persons involved in the real case were changed for the sake of interactive entertainment. A total of 20 cases are featured in the new crime game.

Over the past five years, Brendan McNamara and his Syndey, Australia-based Team Bondi development studio have been immersed in 1940s Hollywood. Considering the distance between Australia and Los Angeles, that’s quite an achievement. Rockstar Games built a studio in Culver City, Calif. to house the new Motion Scan performance capture and facial capture equipment that was designed for this game.

What separates LA Noire, which ships for Xbox 360 and PlayStation 3 on May 17, from anything else on the market – besides its homage to film noir – is the technology that was created to allow a cast of 400 actors bring virtual characters to life in a believable way. McNamara was a pioneer in pushing motion capture performance in video games back on the PlayStation 2 with The Getaway games, when he ran Sony Computer Entertainment’s Team Soho studio in London. With the added processing power of today’s consoles, McNamara was able to get authentic performances from his cast of actors. 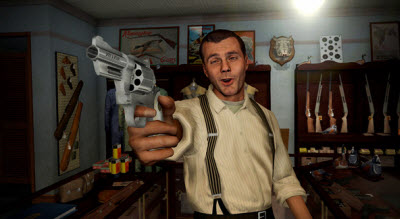 LA Noire is the first game to employ Motion Scan (although new Rockstar Games currently in development are also using the technology). This technology uses 32 HD cameras that are set up in a room to record the facial movements, voice, and actions of each actor. The technology allows the actors to emote freely, as they would in film or television work. All of that emotion, along with the lines of dialogue, appears in the game. The Motion Scan work is added to the performance capture work, which required each actor to work on crude multi-story sets with other actors to bring the 2,200 page-script to life. All of this data was used to construct accurate 3D versions of the actor as the character in the game.

“We captured the actors’ performances the same way that James Cameron did in Avatar, basically,” said Rob Nelson, art director for LA Noire at Rockstar Games. “We had quite a few actors realize when they got to this cavernous space that it’s real acting and they have to bring it. In a lot of ways, it’s like theater because sometimes we had to shoot long scenes.”

McGrady, who plays LAPD Homicide Desk Detective Rusty Galloway in the new game, has done voice work on games like Activision’s Prototype in the past. He’s watched as video games have progressed from working in a recording booth to literally transforming an actor into a virtual character.

“With L.A. Noire, it’s a huge leap forward because they’re actually putting the actor’s face on the screen,” said McGrady. “Face recognition in fan bases has always been a vital component of any actor’s career success. Any chance you have to get in front of a camera, whether it be film, TV or a video game, is an opportunity for people to see you and get familiar with you. One of the major reasons why so many actors jumped on board this game is because we are featured characters in this game.”

McNamara said the actors worked in the Culver City studio over the course of a few months. Staton, who plays lead character Detective Cole Phelps, had the most grueling task. He spent 45 days doing performance capture work and then did 70 straight days of Motion Scan. The game focuses on his character’s journey from the patrolman’s beat to a detective who’s seen the underbelly of LA.

McNamara didn’t employ this new technology just for the sake of advancing virtual characters. A key gameplay component players will have to master is interrogating suspects and reading their faces. Every movement and nuance, from looking away to a sweaty brow, provides clues that the player needs to tell when to believe what’s being said. The emotions and facial ticks that the actors bring to life are crucial to successfully navigating the game world, which spans eight square miles of faithfully-recreated 1940s Los Angeles.

With LA Noire complete, McNamara is already looking to the future. Within a few years, he said, actors will be able to wear costumes while they perform on sets for games. McGrady said that will help more actors feel comfortable performing in video games.

“If you took one logical step from this game, there’s no reason we couldn’t use this exact same process to make a game and a TV show from exactly the same material and the same performances,” said McNamara. “I think that’s pretty interesting.”

Given LA Noire packs two TV seasons worth of crime stories into one huge game, there’s plenty of material to go around.