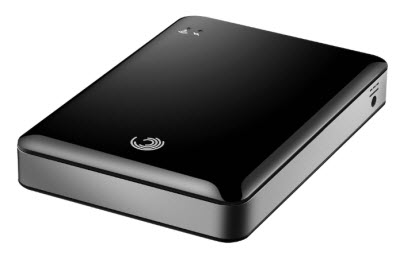 The GoFlex mobile wireless storage device is a battery-powered external hard drive that can wirelessly extend the storage capacity of any Wi-Fi-enabled device.

The device can store 500 gigabytes of data and extend a device’s storage via 802.11 b/g/n wireless networking. It has enough storage capacity to back up the entire library of video, music, pictures and documents that most people have on their mobile devices.

The devices can connect directly to the GoFlex Satellite drive via a free GoFlex Media app now available on iTunes and the Apple app store. GoFlex Satellite is available at online retailers such as Seagate.com, Amazon and BestBuy.com for $199. It is expected to arrive in Best Buy stores in July. Global availability is expected in the summer.

The Seagate device comes with a rechargeable battery, and it has a stand-by battery life of 25 hours and an operational battery life of five hours. Most mobile devices don’t have much storage for things like video, games or other media.

Patrick Connolly, vice president and general manager of Seagate’s retail group, said that as users consume more and more high-quality videos and other media, they need to have fast access to storage devices that can hold movies and other content. That’s because video streamed over the web is bringing data networks to a grinding halt.