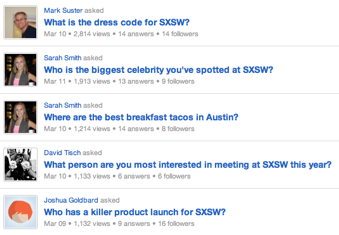 Hipster, a startup which aims to bring question and answers to local communities, has raised $1 million in seed funding from a long list of big-name investors, including Google Ventures.

In stealth mode for some time, Hipster first opened its gates for the South by Sotuhwest conference in Austin, Texas, where it received 4,000 signups to its site and 10,000 to its launch mailing list. Attendees to the conference could use Hipster to ask and answer questions about it — for example, “What is the dress code for SXSW?.” While the conference is over, its SXSW page has still been kept online as demo of its concept.

Founder and CEO Doug Ludlow, who previously started MadKast and sold it to sharing widget ShareThis in 2008, told TechCrunch that the company learned a number of things from SXSW. For one thing, it now plans to launch across every city in the U.S. as opposed to expanding by individual cities.

In comparison to Yelp and Foursquare, which operate in a similar territory while not directly offering question and answers, Ludlow said that Foursquare “provides a very poor web experience for accessing, augmenting, editing, or sharing [local information]” while Yelp lacks a good method for “submitting knowledge when it’s freshest in your mind (namely, while you’re currently at a location.)”