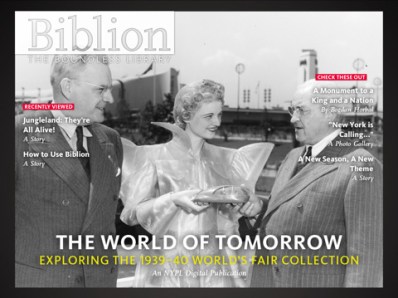 The New York Public Library is beginning to embrace tablets in a big way, starting today with the launch of its new iPad app, “Biblion: The Boundless Library.”

Available for free, the first edition of the Biblion app features over 700 items from the library’s 1939-1940 New York World’s Fair collection. The Library is aiming to open up the wealth of its research collections to the public, so we can expect updates to the app with more collections in the future. Biblion is just one of three major iPad apps that NYPL is planning (more on that below).

Given that NYPL is celebrating its centennial this year with its “Find the Future” exhibition, the Library’s wholehearted embrace of the iPad is particularly fitting.

Biblion acts the way you’d expect: It takes full advantage of the iPad’s touchscreen and doesn’t shy away from sexy visual flourishes. Documents, pictures, and other content in the app is presented in a metaphorical way based on the Library’s stacks. The end result is an app that’s a joy to flip through.

The Biblion app was developed together with design firm Potion, and surprisingly, this is their first mobile app. The firm has developed interactive experiences for museums and other locations. That may just be one of the reasons Biblion feels so fresh. It’s clear that Potion isn’t just another mobile development firm, instead they’ve managed to incorporate their diverse work and experience into the app, helping it to feel truly original. Potion and NYPL have been collaborating on the app for the past five months, with the last month focused on its development.

As part of its centennial, NYPL is planning to launch another app later this week for its Find the Future game. NYPL is also working to release a third app over the summer that will collect a patron’s entire library experience, for example, checking on their account and reserving books. The library tells me it isn’t planning on Android apps anytime soon.

A web version of the Biblion app is also expected to launch this summer, though it obviously won’t have the multitouch features of the iPad app. Instead, the library says the Web version will likely have deeper references into its collection. 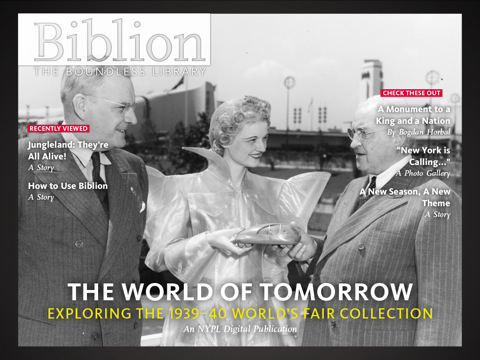 We’ll be exploring the most disruptive mobile trends at our fourth annual MobileBeat 2011 conference, on July 12-13 at the Palace Hotel in San Francisco. It will focus on the rise of 4G and how it delivers the promise of true mobile computing. We’re also accepting entries for our mobile startup competition at the show.  MobileBeat is co-located with our GamesBeat 2011 conference this year. To register, click on this link. Sponsors can message us at sponsors@venturebeat.com.