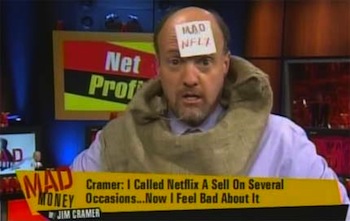 Financial pundit Jim Cramer, host of the CNBC TV show Mad Money, went ballistic today when discussing LinkedIn’s initial public offering, saying that it marked the beginning of a new dot-com bubble that will end as badly as the one 10 years ago.

“This is the most outrageously overvalued, ridiculous thing that I’ve seen since CBS Marketwatch or TheGlobe,” he said.

Cramer also compared the IPO to TheStreet.com, the site that he cofounded. Like LinkedIn, Cramer said, TheStreet was a “sliver” IPO, where only a small number of shares became available on the public market, driving investors into a frenzy. But, the interviewer asked, if LinkedIn’s stock price eventually comes back down to Earth, won’t that lead to more reasonable pricing of other Web companies expected to go public, like Facebook, Twitter, and Groupon? Cramer responded that LinkedIn will probably remain overvalued as long as there’s only a limited amount of stock available.

“We’re going to do another one of these things where we destroy everybody,” Cramer said. He later added, “This is exactly the playbook from 1999.”

So is Cramer right to be worried? Well, I was still in high school during the first dot-com era, but VentureBeat’s Matt Marshall tells me that this doesn’t begin to compare to the hype last time around. Matt also sounds more optimistic about LinkedIn’s long-term potential, as you can see in his post about the IPO.