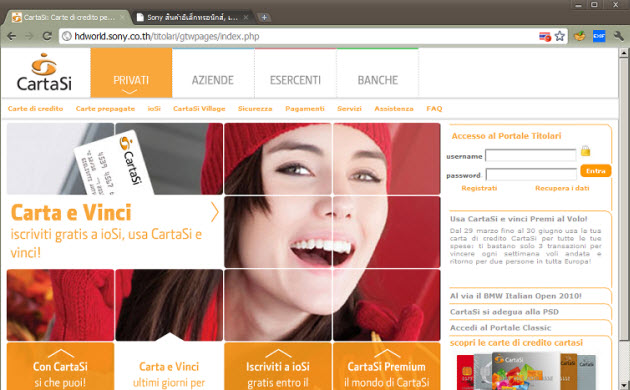 Just after Sony suffered a long and embarrassing outage for its 77-million member PlayStation Network, a Sony site has been hacked again.

This time, hackers compromised a Sony website for users in Thailand. F-Secure, a web security company, found the live phishing site at the Sony Thailand address. That means hackers had broken into the site’s security and were redirecting users to a fake website where it could steal their credit card numbers.

While it’s not that significant, it’s another black eye for Sony at a time when it is trying to lure back angry and frustrated users to its online services, which were down for almost a month. Sony has been notified of the hack.

Update: A second attack on Sony’s systems was more malicious. About 100,000 yen ($1,225) was stolen from Sony accounts in Japan. Users lost virtual points in their accounts. That shows that Sony’s troubles aren’t over yet.