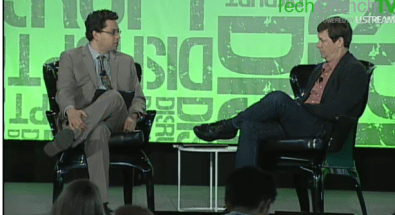 Union Square Ventures‘ Fred Wilson believes the Internet will serve as a greater force for societal change in the future, and somehow, he wants to make money off the chaos that causes.

In a conversation today at the TechCrunch Disrupt conference in New York City, Wilson, an early investor in Twitter, Foursquare and Zynga, said he’s still trying to figure out how exactly to invest in the Internet-driven cultural revolution.

While societal upheaval hasn’t made him any money yet, he says it can still benefit existing tools, like the way Twitter has been used in the recent and ongoing Middle Eastern revolutions, Wilson pointed out. He seems particularly interested in the anti-establishment potential of the Internet and future services.

Speaking more about the present, Wilson also vaguely hinted that Union Square Ventures has sold some of its Twitter stock via secondary markets. When asked by TechCrunch’s Erick Schonfeld, Wilson said he wouldn’t comment, but he also “wouldn’t argue” with news reports that USV and other investors have sold some of their Twitter stock.