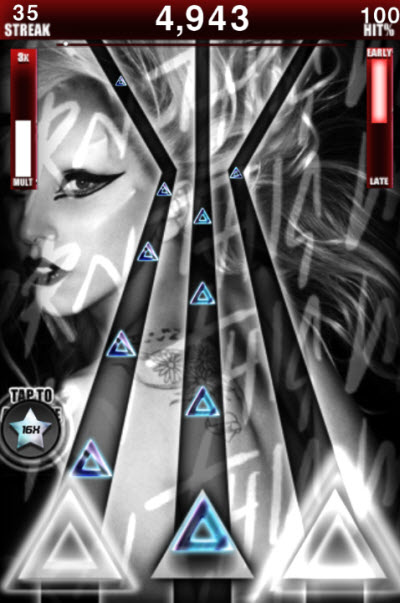 Disney’s Tapulous mobile game division has launched Born This Way Revenge, a music-tapping game for the iPhone and iPod Touch.

The app is one more sign that singing phenomenon Lady Gaga knows how to use technology to maximize her exposure across the globe. Besides the iPhone, she’s also available via Zynga’s FarmVille social game, Twitter and a bunch of other electronic media as well. Gone are the days when music artists viewed technology only as a threat because of piracy fears.

The app is now available on Apple’s App Store and is timed to match the launch of Lady Gaga’s Born This Way album. The game is the latest in a series of best-selling Tap Tap Revenge music rhythm games, with 17 tracks from the deluxe version of Lady Gaga’s album. The game features access to “Gagavision webisodes” on YouTube and video shorts about Gaga, who calls her fans “little monsters.”

“Lady Gaga is one of the most passionate and creative storytellers in music today,” said Tim O’Brien, vice president of business development and marketing at Disney Mobile.  “Her fanbase is equally as passionate, so it was important that the new Born This Way Revenge features ways for fans to stay connected to all things Lady Gaga, in addition to the ability to interact with her and download content.”

Tapulous has created three apps based on Lady Gaga’s songs now. In the games, you tap the touchscreen of the iPhone in tandem with the rhythm of the song as little objects speed across the screen. The newest app has social features such as the ability to connect to Lady Gaga’s Facebook page and get game updates from other Little Monsters. You can use the app to access Lady Gaga’s Twitter feed, talk in chat rooms, get official lyrics, and find Gaga events. The app sells for $4.99.