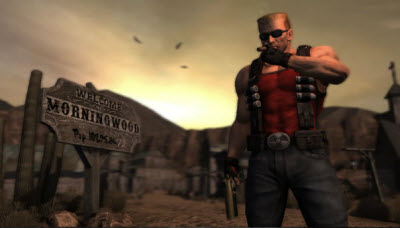 Yes, hell has frozen over. Duke Nukem Forever has gone gold, meaning it’s ready for production and on schedule to ship on June 14 in the U.S. That’s a considerable milestone — and one that many fans never thought they would see — after 15 years of development.

The game from the 2K Games label of Take-Two Interactive and Gearbox Software is a crass first-person shooter game starring Duke Nukem, who revels in lap dances and crude humor as he shoots aliens and crushes their heads with his boot in comic style. Of all video game characters, the Duke is the least politically correct and has the biggest attitude.

The game debuts on June 10 in international markets. It will be available on the Xbox 360, PlayStation 3 and PC. The demo will be available for Duke Nukem First Access Club Members on June 3. The game is being marketed as a guilty pleasure and a comic masterpiece, with realistic and gory combat. It allows players to watch two women having (simulated as opposed to actual) sex and lets them use women as shields. Trailers warn, “please wash hands after playing.” Needless to say, it’s rated mature.

It’s a game that will certainly prove offensive to many and is unapologetic about that. Actually, the adult in you is supposed to be reviled by this game more than any other video game made — that’s part of the allure for the mostly young male hardcore gamer population. The game makes no attempt at all to appeal to a female audience, and instead contains a lot of content likely to drive female players away; but love the idea or hate it, it’s likely to make a lot of money.

“Duke Nukem Forever is the game that was once thought to be unshipppable, and yet here we are, on the precipice of history,” said Christoph Hartmann, president of 2K. “Today marks an amazing day in the annals of gaming lore, the day where the legend of Duke Nukem Forever is finally complete and it takes that final step towards becoming a reality.”

The game was started by developers at 3D Realms under the direction of creative director George Broussard. But it slipped from its original schedule in a big way, making everyone think the game was dead. Four different game development studios contributed to the game altogether. Triptych Studios resurrected the game in 2009. Piranha Games also contributed and Gearbox Software brought the project home to its close.

“Always bet on Duke. I did,” said Randy Pitchford, president of Gearbox Software. “I bet on all of the developers who have ever been a part of this legendary project and I bet that none of us want to live in a world without the Duke. I’ve played the final game and it is an incredible experience — a once-in-a-lifetime opus of interactive entertainment that reminds me once again why Duke Nukem is our King.” Pitchford said the developers have proven they all have “balls of steel.”