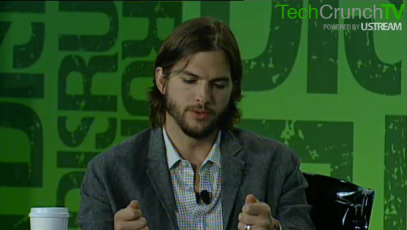 Ashton Kutcher stepped on stage at the TechCruch Disrupt conference today to chat with veteran interviewer Charlie Rose, but perhaps some of his most interesting comments came after the interview, in a back stage chat with TechCrunch’s Sarah Lacy.

Kutcher’s latest acting gig — replacing Charlie Sheen on the sitcom “Two and a Half Men” — was off-limits to Charlie Rose (something that TechCrunch’s Michael Arrington joked about before the interview), but Lacy brought it up as a potential commitment that could affect his technology pursuits. Surprisingly, Kutcher said that working on the CBS comedy will actually allow him more time to focus on technology.

His tech projects include investments in Airbnb (where Kutcher also serves as an advisor), Foursquare and Path. He also co-founding Katalyst Media, which produces movies, TV shows, and web video.

Kutcher said that the work schedule of a TV show is much easier than flying all over the world to work in films. He said he was familiar with the schedule after his long experience on “That 70’s Show” — which is generally a 30-hour a week commitment with plenty of vacation opportunities throughout the year.

Speaking to Charlie Rose, Kutcher admitted that he learned a lot from the failure of the Blah Girls in 2008, a “South Park”-type series aimed at teenage girls. Arrington also hinted that Kutcher had 12 undisclosed investments, but Rose didn’t manage to get any of those revealed.

When it comes to choosing what to invest in, Kutcher said he looks for companies that are solving real problems, and he also pays close attention to the founders.