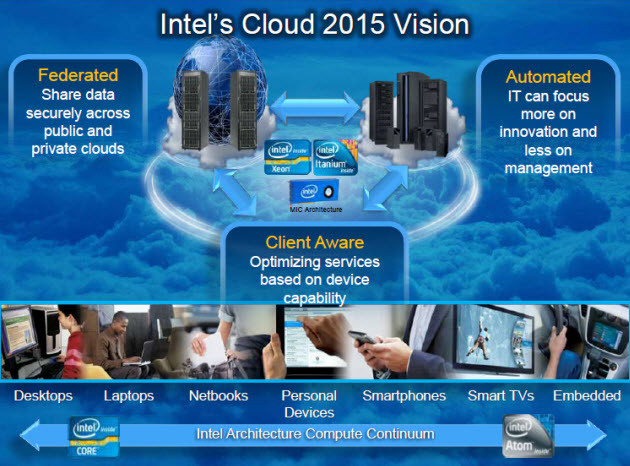 Intel announced today its AppUp cloud service for small businesses. The service will give companies access to a wide variety of apps over the cloud, or web-connected data centers.

The announcement will put Intel into competition with players like Hewlett-Packard, Dell, IBM and Amazon, but it will also extend Intel’s direct contact with users of its technology. The move will also ensure an important role for Intel’s own chips, software and hardware in future data centers.

“This is another part of our cloud strategy,” said Boyd Davis, head of data center marketing at Intel.

Intel says the service will enable small businesses to serve the masses of internet users, who by 2015 will number well above 1 billion and will use as many as 15 billion connected devices.

The service is a catalog of apps that reside on servers that are housed inside a customer’s location. Those servers connect to Intel’s data centers and can be accessed remotely over broadband connections. The apps can help improve security, productivity, backup, collaboration, enterprise resource planning and other categories for small businesses.

Intel uses its own data centers to deliver the service. Customers can lease the hardware and pay for the software on a pay-as-you-go basis. If they prefer, users can keep the server and data on their own sites, minimizing the risk of unauthorized access to the computing infrastructure.

Small businesses plan to use public cloud services but are anxious about the security of it. The benefits of the cloud include low upfront costs, zero maintenance costs, pay-as-you-go service, and flexibility for computing infrastructure.

The service also has benefits for developers of applications, who can upload software immediately to a worldwide distribution service, convert their customers to a subscription model, create their own special offers, and otherwise manage their apps for customers.

Davis said he doesn’t believe the service competes with rivals, in terms of taking packaged apps and delivering them as a pay-as-you-go service. Major computer makers such as HP or Amazon could tap the service as part of their offerings, he said.

“This is a new option we haven’t seen in the marketplace yet,” Davis said. “It’s complementary.”

Computer makers can choose to participate in the program, offering Intel’s technology to their customers under their own brand names. So far, Acer, Lenovo, and NEC have chosen to participate, rather than compete with Intel. Lenovo is using the service now with Intel single-chip servers. More partners will be added in the coming year.

Intel has signed up dozens of app providers for the service, including Microsoft, McAfee, Symantec and Novell. Under the program, a customer pays a managed service provider for the Intel service. The MSP pays Intel, which in turn pays the providers of apps for the service.

Intel will target the service to an estimated 22 million small businesses worldwide who spend about $61 billion a year on software. Those companies prefer to have data on their premises, easy access, and reliable service, said Bridget Karlin, head of the program for Intel.