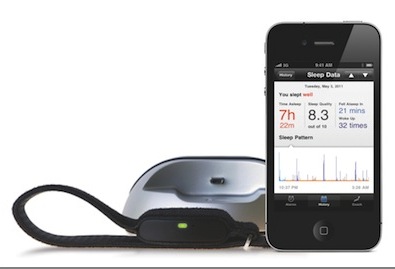 If a mismatched sleep schedule has been causing tension with your boyfriend, girlfriend, husband, or wife, a new startup called Lark has built a product that may be able to help — a silent, vibrating alarm.

The Palo Alto, Calif.-based company demonstrated its technology on-stage at the TechCrunch Disrupt conference last fall, where entrepreneur and investor Sean Parker skeptically remarked, “I just have a hard time believing you’re serious.” But Lark’s product is real, and it’s finally going on-sale today. Founder and chief executive Julia Hu told me that after the conference, Lark managed to raise some funding (specifically, $1 million from Lightspeed Venture Partners and unnamed angel investors), which made the team decide to launch with a more ambitious product — hence the delay.

Lark describes its main product as a “silent un-alarm clock”, and it includes an iPhone application, a charging dock, and a wristband. When users go to sleep at night, they connect their phone to the dock and tie the band around their wrist. Then, at the appointed time, the wristband will start vibrating. That means the alarm shouldn’t wake up anyone you might be sleeping with, and the wristband’s gentle nudging should lead to a much less jarring awakening than a loud clock.

Customers pay $129 for the device itself, or $189 if they want the sleep coach app too. The pricing probably puts the device out of the range of one obvious audience — college students. (I was always waking up my roommates with my alarm.) Hu said that’s probably true for now, though she’s hoping to partner with education programs in the future.

With the sleep coach app, users can not only track their sleep patterns, but also improve their sleeping habits. After it has gathered seven days of data, Lark will classify what kind of sleeper you are, make recommendations for improvement, and remind you about those goals. The app was built with input from Dr. Jo Solet, a Harvard sleep expert, and Cheri Mah, a professional sports sleep coach.

Hu said she plans to release an Android version eventually but that Apple asked for a period of exclusivity. That seems fair — after all, the company will be selling Lark devices in Apple stores around the country starting on June 14.