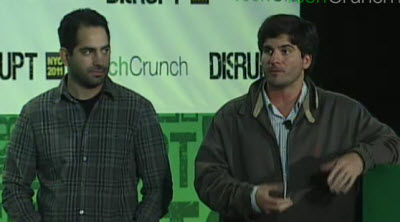 The Gnonstop Gnomes social app is the first product of Churn Labs, an incubator that Hamoui created after he left Google last October. The app is the sort of zany thing that entrepreneurs can come up with when they just follow their own sense of curiosity.

Hamoui and Haider Sabri presented the app at the Techcrunch Disrupt conference on Monday in New York. With the app, you take pictures with your iPhone or Android camera and insert an image of an animated gnome into the picture. The app records the location of each picture and so you can follow the path that the gnome has followed. 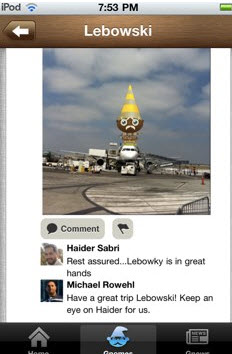 “We are looking at areas of technology that haven’t been fully explored or fully charted,” Hamoui said. “We don’t care how crazy it is or silly it is. We think that by being there and seeing what we learn, we may bump into interesting projects.”

It’s an amusing app. But the gnome is interesting in that it can only live on one device at a time. The social part comes in when someone else “lyfts” the gnome from your phone to their phone. They do so by grabbing the gnome from your screen and making a lifting motion. You are essentially getting a “drag and drop” motion between devices. The new owner of the gnome can take pictures of it and then pass it along to someone else. It’s pure an experiment in social gaming right now. You could send a gnome on a mission to get to a landmark and then see if it gets there.

As for running the incubator, Hamoui said, “I started late last year. What you are finding is that when somebody is in a situation where they can do whatever they want, they go to the beach or whatever but for us this is what we want to do. It is not the most efficient way to make money.”

Hamoui said that he is curious to see if people will pass around digital objects. Lebowski, the prototype gnome, has now visited 2,500 miles.