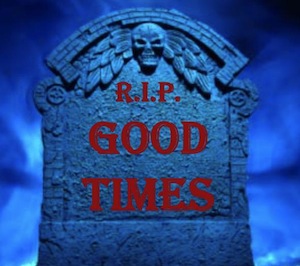 Onstage at the TechCrunch Disrupt conference today, Roelof Botha, a partner at Sequoia Capital, looked back at one of the firms’ more controversial moments — the presentation that it gave to its portfolio companies after the financial crash in late 2008.

Back in October 2008, the firm supposedly called all of its entrepreneurs together into one room and outlined its position on the financial crisis. The presentation took its tone from the first slide, a tombstone reading “RIP Good Times”, and it ran through a number of bleak short- and long-term scenarios. Afterwards, a number of Sequoia startups announced significant layoffs. When rumors of the presentation leaked out, and VentureBeat published the full slide deck, it became one of the iconic moments of the downturn in the startup world.

Two and a half years later, however, the presentation may seem a bit alarmist, since Silicon Valley seems to have bounced back. Startup valuations are climbing (leading to lots of talk about a bubble), many firms are competing to hire the top engineering talent, and LinkedIn just had a spectacular initial public offering. So at the TechCrunch Disrupt conference in New York, TechCrunch founder Michael Arrington asked: Does Sequoia regret the presentation?

“I don’t think so,” Botha responded.

Sure, things are better now, but Botha noted that there was a rough patch at the end of 2008 and for much of 2009, both in the broader economy and specifically for startups trying to raise venture capital. He argued that by “trimming a little bit of the fat,” startups were able to weather the downturn, then raise money if necessary when the environment improved.

“If we didn’t act as swiftly if we did, and it ended up that the recession was a lot worse, a lot of companies may have gone by the wayside just because of poor timing,” Botha said.

Speaking of the bubble, Botha also acknowledged that he’s worried about valuations creeping up, but Sequoia’s approach is to be “judicious” about its investments, rather than pulling back entirely. After all, back in the dot-com craziness of 1999, Sequoia made two investments that paid off handsomely — Google and PayPal.