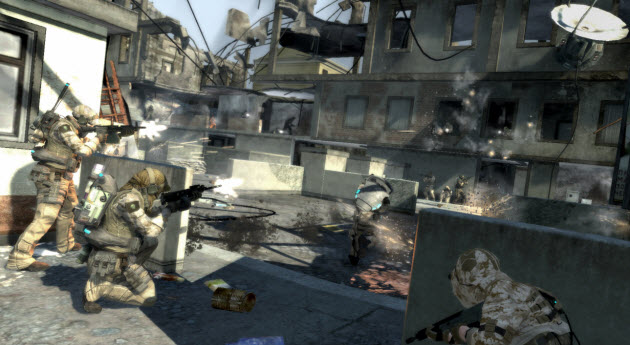 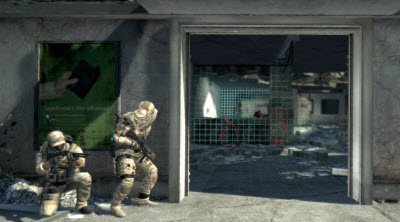 The game is an attempt to capitalize on the collision of two worlds: the hardcore console games and the free-to-play online games that are taking off in places such as Asia. Ubisoft is walking a tightrope, making some of its cool content available at a lower entry price than its typical $60 games, but still giving gamers a reason to pay full price as well. In this case, users can play the online game for free and pay real money for virtual goods such as better weapons or decorations.

All console game makers are engaged in creating these kinds of free-to-play hardcore online games, from Electronic Arts with its Battlefield Heroes game to Activision Blizzard’s upcoming Call of Duty Online.

The Ubisoft game lets players become Ghosts, or modern super soldiers with advanced technology and intelligence, in a multiplayer-only combat game. It is played from a third-person point of view and focuses on the tactics of team combat, allowing online matches such as four players squaring off against four players over the internet. Ubisoft says the 3D graphics and environment maps will be so sophisticated they will seem like scenes from a retail console game. 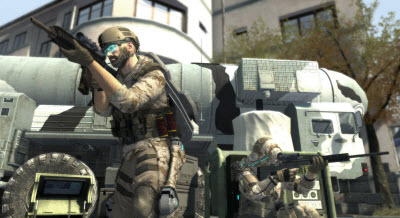 The title will debut in the second half of the year on the PC as a downloadable and dynamic title. While it looks good and features cool tactics such as a detection device that allows players to see the locations of enemy players for a number of seconds, the game doesn’t have all the bells and whistles of the complete upcoming console game, Ghost Recon Future Soldier.

Chris Early, head of digital games at Ubisoft, said that the company examined its brands and focused on Ghost Recon for a free-to-play game because it hasn’t been on the PC for some time and thought that it could use its updated game engine for the upcoming Ghost Recon Future Soldier to create a cool online multiplayer game. The game marks an important transition for Ubisoft, which generated $1.4 billion in sales in the most recent fiscal year. 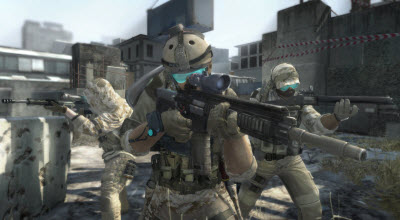 He describes the game as the most social, connected and customizable Ghost Recon experience yet. I played the early alpha version of the game in a four-versus-four match where players had to dominate three flags on a map. We ran through a bullet-ridden retail complex trying to get to the flags first and holding them for as long as possible. The game is a thinking person’s shooter, since it’s easy to die and the winner usually isn’t the side with the fastest reflexes.

The combat in this game is all about superior weapons, intelligence, and tactics. You can outflank an enemy. You can detect where they’re moving and set up a trap. And you can use special abilities such as a forward-facing shield or a bubble shield to protect yourself as you move forward. It isn’t quite as polished — nor is it as arcade-like — as Call of Duty Black Ops. But we’ll see how it develops over time. 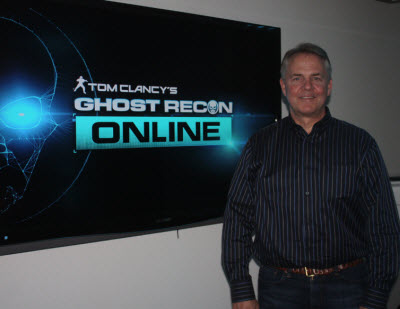 Users can choose between three classes of Ghosts:  assault soldiers, snipers, or specialists. The graphics look really good, but the real test will be how fast the game plays on an ordinary broadband connection. The game’s lobby has social chat features and leaderboards. And you can see how you progress in achievements as you play the game over a long time.

A lot of rival games use technologies such as Adobe Flash or Unity Technologies’ game engine. But Ubisoft chose to use its own engine to create the highest-quality graphics, Early said. You have to download a client in order to play the game. The game isn’t a port of a previously created game.

Ubisoft is also investing heavily in other online games. It has launched CSI Crime City on Facebook, The Settlers Online in Germany and France, Might and Magic Heroes Kingdoms. Petz World is coming this summer and Imagine Town is in the works; both are for kids. There are a half dozen social network games and mobile games coming too, Early said.

The game is being built by Ubisoft’s Singapore studio. Players can sign up for the closed beta test now. The game will be launched worldwide.