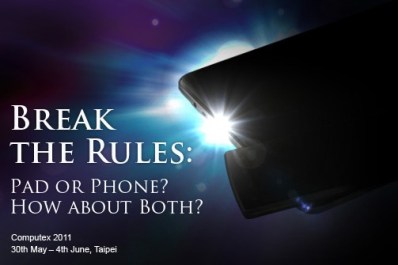 Who says tablets are getting boring? Asus may be gearing up to unveil a slate at Computex next week that can dock with (and potentially be powered by) an Android phone, Engadget reports.

The unholy tablet/smartphone union could resemble Motorola’s Atrix 4G laptop dock, which transforms that smartphone into an ultraportable notebook. It could be an interesting way for Asus to differentiate the tablet from the plethora of identical-looking Android slates.

Hints of the tablet were discovered by an Engadget user who dug up the teaser image on the right from Asus’s website. Clearly, Asus isn’t great at subtlety (or restrained use of lens flare).

Asus will likely have its entire upcoming tablet line on display at Computex, including the Eee Pad Memo, Slider and Transformer. All of those feature unique twists of their own — the Memo is a 7-inch note-taking tablet, the Slider features a phone-like slide-out keyboard, and the Transformer can be fashioned into a tablet or laptop. They’re all expected to launch in June.