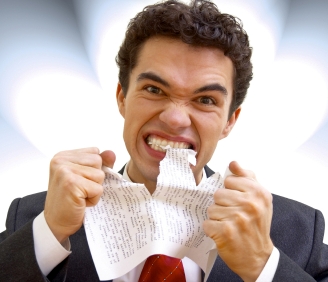 You may think that a tech blogger’s life is a glamorous whirl of free lunches, great gadgets and being bought drinks at conferences. If so then you are probably following the wrong bloggers. In fact, it’s more like a long round of typing, getting annoyed with PRs and founders and then some more (louder) typing.

The methods of annoying a tech blogger are myriad. So following the phenomenal success of “How to pitch to tech journalists“, we at VentureBeat have decided to enlighten the world on some of the most infuriating.

1. Having no respect for my time

One of the few sane things I have seen Chris Sacca say (admittedly I only saw him speak once and that was in Amsterdam) is that email is a task list created for you by someone else. Of no one is this more true than the tech blogger. I am not an extension of  your marketing team so don’t treat me like I am.

When pitching, be succinct. Do not make me drag the story out of you, only to discover that there is no story. Do not corner me at an event and spend an hour trying to bludgeon me into writing about your company.

Be aware that a story on an established company is much more likely to get page views than one about an unknown startup. So it’s a bigger investment for a blogger to write about you at an early stage. Be gracious in return.

2. Taking constructive criticism as an insult

If I don’t write about your company but give some feedback on the product or pitch, don’t get angry. Tech bloggers can be shorted-sighted, prejudiced or just plain wrong, but we do hear a lot of pitches and may have something useful to tell you.

If I have replied to the pitch or given feedback on the demo without doing an article, that’s an investment of my time for which I have received nothing in return. I recently explained to one founder why I wasn’t going to write about his company and suggested some alternative outlets. Instead of getting offended he said “Thanks for the tips and for reminding me what being a real journalist means.” Now that’s stylish.

This is often followed by a pitch for a story that is nowhere near the topics I normally cover. Don’t claim to know my work unless you do. You don’t have to be a fan to convince me to write about you (although obviously it helps). Bloggers want interesting stories. All you have to do is be interesting, and preferably nice too.

4. Lying, including lying by omission

Do not tell me that this is an exclusive when it isn’t or neglect to mention that three other rival publications have already covered the story. Don’t inflate the number of users, employees or customers. Don’t make claims that are just not true. If we publish these “facts” we end up looking stupid and will never write about your company again.

Similarly, do not send corrections to your basic PR info after the story has been published. You should get it right before you send it.

5. Pitching over the phone

Most bloggers have a preferred method of contact. Here at VentureBeat, it’s email to tips@venturebeat.com. Don’t over-rule that and contact us via phone, Skype or by throwing stones at our window. Pitching over the phone is particularly annoying because we then have to take notes and later turn them into something legible.

It’s perfectly acceptable to resend a pitch email. It might have been a busy news day. We might have had a day off. But sending the same story more than twice, in the hope that we will miraculously see the light, is just plain annoying. Don’t do it.

Don’t set an embargo time and then change it. There is always some idiot who won’t get the message and will publish at the original time. Pick a time and stick to it.

Also do not hold everyone to an embargo except for one publication. That’s like promising everyone a slice of cake and then giving the whole cake to someone else.

8. Sending out an unannounced news release on Sunday night

Because we don’t spend all our time typing.