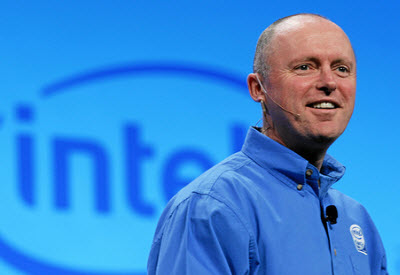 Intel executive Sean Maloney is touting a new class of mobile consumer computers called Ultrabooks in a speech in Taiwan today. The company says that 40 percent of consumer laptops will be based on Ultrabook designs by the end of 2012.

As we reported on Friday, Sean Maloney, Intel’s newly appointed president of Intel China, is announcing a big shift toward low-power chips in a keynote speech at the Computex trade show in Taiwan today, where he is unveiling a heavy-duty effort to steer Intel into the production of low-power microprocessors.

Maloney is expected to say that Intel will accelerate its efforts to make chips that are more appropriate for tablet computers, smartphones, laptops, and low-power desktops. Intel has been doing that for some time. But Maloney, a well-respected executive who has now recovered from a stroke that kept him sidelined last year, iwill take that message even further, according to a source familiar with the matter.

“Computing is taking many forms,” said Maloney in a statement. “Technology innovation is a catalyst, and we believe the changes Intel is making to its roadmaps, together with strong industry collaboration, will bring about an exciting change in personal computing over the next few years.”

That’s a big difference, but it doesn’t mean Intel will cancel a bunch of chips in development. Rather, the company will modify the roadmap over the next couple of years so that the center of its efforts focuses on 15 watt or lower chips.

The Ultrabooks will be thin and light laptops, akin to a Macbook Air, that will have high performance, all-day battery life, good security, and tablet-like features. Asus is introducing its first Ultrabook model, the UX21, today using Intel’s latest Core microprocessors. The machine is less than 20 millimeters thick and will sell for less than $1,000. Jonny Shih, chief executive of Asus, said his company is aligned with Intel on the vision for the Ultrabook.

The second chip dedicated to the Ultrabook vision will be Intel’s code-named Ivy Bridge 22-nanometer microprocessor. Intel has showed a working Ivy Bridge chip, one of the flagship chips for this new low-power strategy. The chip uses Tri-Gate transistors, which take advantage of three dimensions and allow for a 50 percent power reduction at a given level of performance with only a 2 to 3 percent increase in costs. Ivy Bridge will debut in the first half of 2012 and will be followed by a chip code-named Haswell that will represent the fruition of Intel’s efforts to reduce the average wattage of its mainstream chips. Haswell will debut in 2013.

On another front, Intel is accelerating development of its lowest-power Atom microprocessors, which are targeted at smartphones, tablets and ultrathin laptops. The Atom chips have been shipping for a number of years, but Intel will turn up the treadmill now. It will shift from 45 nanometer Atom chips this year to 32 nanometer chips and then 22-nanometer chips in 2012. With every manufacturing shift, Intel can make its chips cheaper, faster, smaller and lower power. That pace of innovation is faster than the pace of Moore’s Law (observed in 1965 by Intel chairman emeritus Gordon Moore), which says the number of transistors on a chip doubles every two years.

Intel is also designing a brand new Atom single-chip computer architecture, code-named Silvermont, from the ground up. Those chips are also going to be designed for low power, and the cadence for introducing new chips will become increasingly fast. The 22-nanometer Silvermont chips are expected to be introduced around 2013.

Intel’s Atom processors are beginning to appear in tablet computers and about 10 of them will be shown off at the Computex show in Taiwan. Those tablets use the Atom Z670 processor.