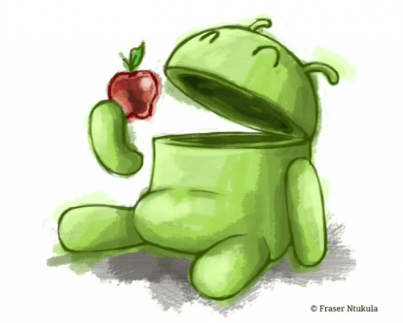 Android continues to dominate US smartphone market share (no surprise there), but the platform’s skyrocketing growth may be beginning to slow down, according to the latest report by research company Nielsen.

Nielsen’s data shows that Android’s market share remained the same for the period between February and April (36 percent) as it did for the month of March (37 percent). That’s certainly not a wide span of time Nielsen is comparing, but the data does agree with NPD’s April report, which noted a dip in Android’s sales for the first time in two years.

NPD attributed Android’s dip to the release of the Verizon iPhone in February, which may also have had a negative effect on Android sales. But Nielsen’s data doesn’t show much of a change for the iPhone’s overall market share between February and April, where it stayed at 26 percent. Even RIM’s fall in market share has seemed to slow down, so perhaps Nielsen is just noting a particularly stagnant period for the smartphone market.

Even without causing a major rise for Apple, the Verizon iPhone’s release could have negatively impacted Android in other ways. Some Verizon users, for example, could be holding out for the iPhone 5 later this year instead of picking up an Android device. Previously, Verizon subscribers who wanted a smartphone could only choose between Android and BlackBerry devices.

As the iPhone makes its way to other carriers (we already know that Apple is testing the iPhone on T-Mobile), it will continue to put pressure on Android sales.

Nielsen’s data also shows that Android users are more data hungry than their iOS counterparts, confirming earlier reports. After analyzing 65,000 cellphone bills in the US for the first quarter, the company found that Android users consumed around 585 megabytes of a data per month, compared to 492 MB of data for iPhone users.