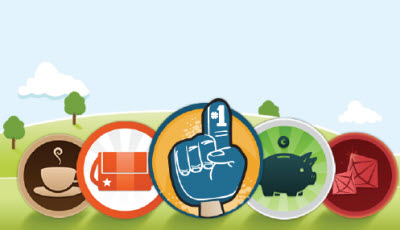 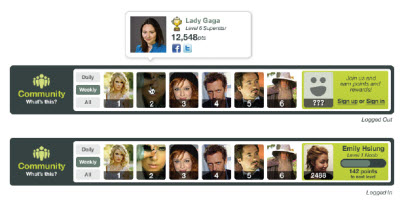 The beefed-up program includes a dynamic game engine and widget studio. Both are aimed at making it easy for companies to make their web sites more game-like and consumers more loyal. The new version works across a company’s web site, mobile, and digital presence. The announcement shows that the young gamification industry is getting more sophisticated at helping brands hang on to their consumers and is ready to move on to the next level.

Gamification appears to be hot. Badgeville has a total of 60 customers now, and in the second quarter, its customer bookings were 40 percent higher than in the first quarter.

“We think there is a multibillion-dollar opportunity here,” said Kris Duggan, chief executive of Badgeville.

Badgeville also released its Gamification Widget Studio, which makes it easy for brands to add social rewards experience such as leaderboards and achievements in a matter of weeks.

While Badgeville has rivals such as Bunchball, Duggan says his company has a better platform because it was crafted in the modern Web 2.0 era.

That’s open to dispute, of course, but Badgeville has a lot of new customers. They include Interscope Records and Island Def Jam (Universal Music), Bluefly.com, Major League Gaming, LiveMocha, The Active Network, and many more.

Duggan describes the company’s platform as lightweight. That’s important for gamification customers. Badgeville has to offer customization to its customers, but it can’t get bogged down in doing one-time jobs for customers that eat away at its profits and time. Each one of Badgeville’s customers uses the same basic engine. Duggan said the company has applied for patents related to its dynamic game engine.

“We like to think we are the Goldilocks of gamification,” Duggan said. “We are just right. Others are too custom or have too much legacy.”

Some critics have said that gamification is a superficial way to get customers to engage with web sites. They say it is a fad. Duggan acknowledges its benefits shouldn’t be exaggerated.

Eric Bahn, founder of the Beat the GMAT web site, said in an interview that his company chose Badgeville to gamify its new web site because it was the most flexible, easy-to-deploy and innovative. It took around three months to implement, but mainly because the company was one of the first to test the new Badgeville platform.

The company turned on the new gamification features last week and saw an immediate bump in the number of users earning achievements. The engine helped Beat the GMAT, which helps students take business school tests, offer numerous campaigns and increase its revenue per user through a variety of partnerships.

Market researcher Gartner said it expects that more than 70 percent of the top 2,000 worldwide companies will have at least one gamified application by 2014.