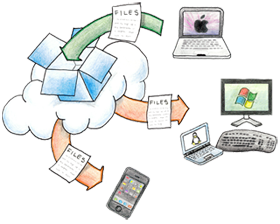 Dropbox’s mobile application will be preloaded on Sony Ericsson’s Android smartphones on European and Asia-Pacific countries starting today, Bloomberg reports. Softbank will have Dropbox pre-installed on two of its Android phones. The terms of the deals were not disclosed.

Softbank is Japan’s third largest mobile carrier. It will promote Dropbox in its 7,000 retail locations. Softbank’s customers will get an additional 1 gigabyte of storage space free of charge.

Japanese-Swedish Sony Ericsson is now focusing on Android smartphones. The company hasn’t been performing that well in the recent years. Its worldwide market share has dropped to approximately 5 percent. But now it thinks that focusing on Android system with a new product lineup will make things better. According to Bloomberg, Chief Executive Officer Bert Nordberg said in March that the company is aiming to expand its global share of Android handsets to 25 percent from 14 percent at the beginning of this year.

One of the core features is the possibility to share content with other Dropbox users or even make it publicly available, which makes large email attachments unnecessary. You can upload necessary documents to Dropbox’s server and just share the link to the recipient.