This post is part of a series brought to you by GoToAssist.

No one will say that starting your own company is easy. But it’s a lot easier than it used to be. One of the major reasons: it’s cheaper and more simple to build scalable infrastructure than ever before. The last two years have brought a wave of low-cost, efficient applications that allow small businesses to build fast, secure and smart internal systems — and they’re getting plenty of use.

As a startup founder, your plate is constantly full of new tasks and concerns: personnel, payroll, fluid communication, continuous innovation. The last thing you need to worry about are the bare-bones tools that help you tackle these never ending to-dos.

Here are three applications aiming to take that load off your shoulders.

Yammer provides social networking services for enterprises. One way to think of it: It creates a miniature Facebook inside your

company, allowing fast and cogent real-time communication between many employees at once. It’s secure and private — allowing for even more private conversations to occur between individual employees. And it’s searchable, allowing companies to build institutional memory as they go — an invaluable byproduct.

Yammer succeeds where its half-baked predecessors like FriendFeed and Google Wave failed. It’s not bogged down by too many features or options, and it’s easier to find the communications that are most relevant to you right off the bat. For example, when you first sign in, you are presented with your own feed — a stream of messages that apply to you; you then have the option of switching to the company feed, so you can see all communications recently swapped between coworkers. 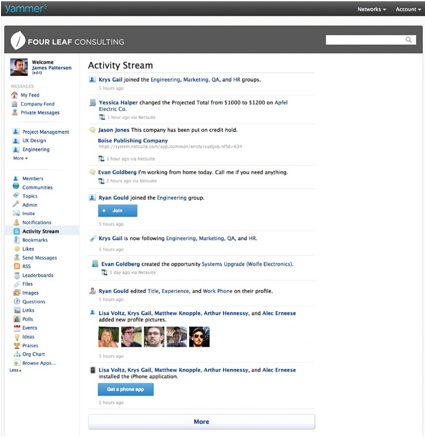 Folding in many of the rich communication options on Facebook, Yammer allows enterprise employees to set up and invite coworkers to company events and track their participation; it allows members of company networks to freely share links, videos, images and more within the Yammer interface; and it allows employees to label and group their messages under specific topics, making information easy to find and use. Managers even have access to analytics that show them how their employees are engaging with media and each other.

Operating on the freemium model, Yammer provides basic enterprise social networking services for free and charges $5 a month for premium capabilities, including beefier security, company directory integration and more. Its intuitive interface has won it some loyal followers and a client base of more than 80,000 companies around the world, many on the Fortune 500. Especially for young companies that lack the resources to build their own internal communications systems, Yammer gets the job done.

Web presence is everything these days for most small businesses. Not only are most startups focused on delivering web-based

service and products, even bakeries, pet stores and the like rely in one way or another on a professional, polished website. Many prospective customers will visit a website before ever going to a store, and first impressions aren’t to be underestimated. Combine this pressure with the growing need and desire to collect data from these customers, and you can see why attractive, user-friendly web forms are so vital.

This is where Wufoo comes in. It’s an Internet application that makes it simple to build good-looking and highly-functioning web forms, even if you’ve never heard of HTML. Wufoo takes care of both the front and back ends, collecting, parsing and organizing all of the data these forms collect from your users. From surveys to order forms to membership registrations, Wufoo allows you to snap together the fields you need to collect meaningful information with drag-and-drop ease. 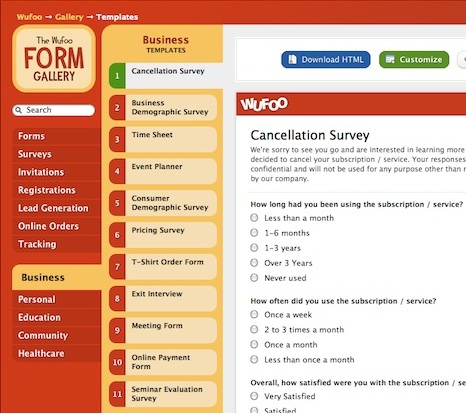 Let’s say you own a small business, and you have some web experience, but it pretty much stops at tables and some elementary javascript. When you need a form, your first impulse might be to Google “HTML Form Code” or something like it. And you will see a lot of links to sites that will build and generate code for forms for you. What sets Wufoo apart is its flair. With 150 fonts and numerous templates to choose from, customizing the look-and-feel of your form to match the tone of the rest of your website is easy — as is designating required fields, adding radio buttons, drop-down menus and more. Many of the other, less polished sites you may find on Google don’t offer this range of options, and require significant CSS know-how to customize anything.

While it’s true that most web startup founders aren’t lacking in web savvy, Wufoo can be a powerful tool for the average small business owner that wants to interact with more customers over the web. It can save hours of detangling code and piecing together information between databases. The app gives users time to figure this out, providing three forms for free before switching to a paid model with different packages tailored to small, medium and large companies.

mostly because it’s so simple. It harnesses the power of cloud computing better than almost any other service out there because it refuses to junk up its offering with too many sub-features. It’s tagline couldn’t be more apt: “Simplify your life.”

File-sharing has traveled a long and windy road. First there were floppy disks, then flash drives and shared folders on servers. With the advent of the cloud, people can now share large files across the web no matter where they are located or what type of computer they are using in virtually no time at all. By capitalizing early on this trend — 2007 was fairly early for this type of startup — Dropbox won major market share, allowing even the most lay users to share and download files from one another — and collaboratively edit them too. This easy, free movement of files and information greases the wheels for startups and large companies alike to move rapidly and nimbly. 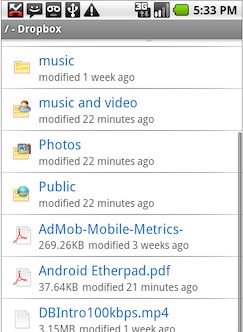 Dropbox doesn’t always have to be about sharing however. Because it allows a tremendous amount of information to live on the web, it provides a simple backup method to personal computer users all too familiar with hard disk crashes and damaged systems. Most users find that it has enough bandwidth that they never have to save files to their actual hard drives again. Dropbox even retains past versions of deleted files so that users can call them up if they really need them again.

Dropbox has been rewarded for its uncluttered approach to file sharing and storage, picking up plum reviews from outlets ranging from the New York Times to PC Magazine, not to mention a Crunchie, a Webbie and a Macworld Editor’s Choice Award. Startups looking to create a communal space where employees can swap documents, photos and more need look no further than spacious Dropbox.

The first 2 GB of space on Dropbox is free — and more than most of its users can fathom. Small businesses will probably require one of the two “pro” options, $9.99 a month for 50 GB and $19.99 a month for 100 GB. These prices are almost too reasonable for a service that can essentially give your company a spacious luxury condo on the web.