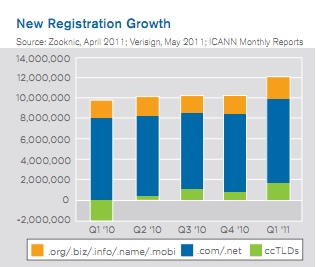 The pace of new domain name registrations shows no signs of slowing down: Consumers and companies signed up for 7.9 percent more in 2010.

It’s a sign that the Web continues to grow, and that the exhaustion of standard IPv4 addresses in February has had no affect on that growth.

In its quarterly Domain Name Industry Brief, Verisign said it recorded 209.8 million top-level domain names on the Internet. 15.3 million new domain names were registered in 2010 — a 7.9 percent increase from the previous year and 2.2 percent over the last quarter.

The most popular domain name extensions, in order, were .com, .de, .net, .uk, .org, .info, .nl, .eu, .cn, and .ru, which accounted for 61 percent of all new registrations. Interestingly, despite the growth in China’s Internet industry, the .cn domain dropped from seventh to ninth place over the last year, making way for Netherlands’ .nl and the European Union’s .eu.

The report also found that out of 107.3 million .com and .net domains, 21 percent were one page websites, 67 percent were multi-page websites, and 12% were parked domains, and an estimated 88 percent resolved to a valid website. It found that the renewal rate for the .com and .net extensions was 73.8 percent, which means that around 28 million of these domain names were released back to the registry this year.

The complete report is available to download as a PDF.