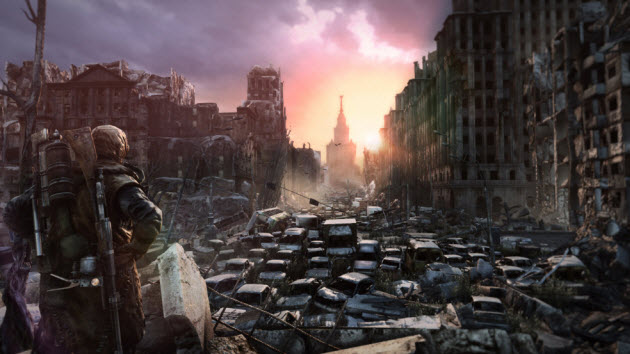 There are plenty of post-apocalyptic shooting games around, but Metro 2033 was one of the most interesting titles from 2010. Now THQ is announcing a sequel to that PC survival shooting game. And it looks like a good one at that. 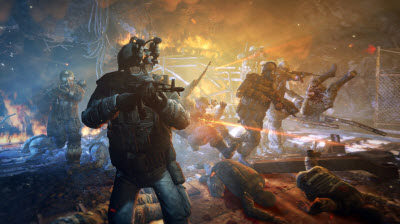 This kind of game is critical for THQ to establish its reputation as a high-quality game maker. The Calabasas, Calif.-based company is one of the big publicly traded video game publishers, but it’s a lot smaller than rivals such as Activision Blizzard and could use more repeat-hit franchises.

Metro Last Light takes place in 2034, a year after the last game. It is more than two decades after a nuclear war all but extinguished mankind. Humanity is on the edge, living in places such as the Metro beneath Moscow. Most people living in this era never see the sun and often don’t get much more than 500 yards from where they were born.

Humans have a lot of horrible beasts to worry about, both in in the subterranean world and above ground. But now they’re stuck in a civil war over a Doomsday weapon that could very well finish off the apocalypse. You play the hero Artyom, the “last light” for humans before they slip into the darkness.

I’ve seen a scene from the game and it’s a good first-person shooter. The gas masks that the enemy humans wear and the dark, dreary world remind me of Sony’s Killzone games. The game play combines stealth and all-out machine gun fire. The ruins afford a lot of cover. It isn’t a pure run-and-gun experience, where you can charge into the environment hoping for the best.

One scene I watched showed some stealth kills, followed by a fierce firefight with some fascist-like enemies. It’s not easy to take down heavily armored shooters, but the gun play is quite satisfying. The rolling gun battle moved onto railroad cars where you could duel with the enemy in the other railroad car chasing you.

The developer (4A Games) acknowledged the first game was rough around the edges, so it’s working on developing a more polished game. In this game, the graphics are great, with a lot of cool lighting in the semi-darkness.

The developers say the game will have a deep story and plot twists that will keep players engaged. The game will appear in 2012 on the PC, Xbox 360 and PlayStation 3. Get ready to “fight for every bullet and breath” in the claustrophobic, immersive world of Metro Last Light.