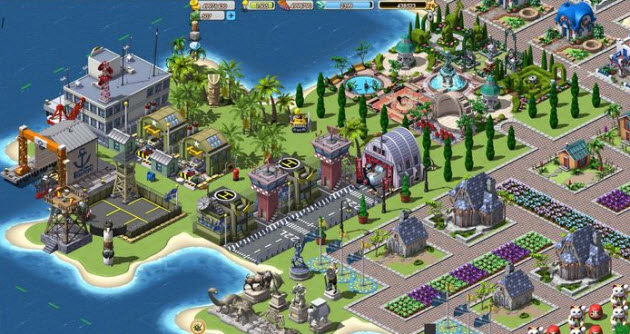 Zynga, the leader in social games that could be near an initial public offering, is launching its first combat social game on Facebook tomorrow. The Empires & Allies game is a big switch for a company that has focused on non-violent casual games to date such as FarmVille and CityVille. 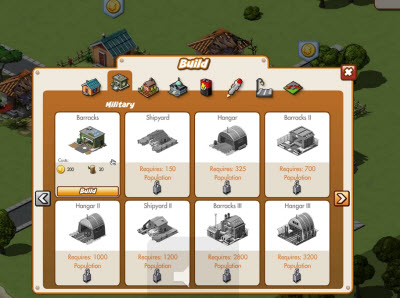 But this combat strategy game has the Zynga style, which is light-hearted, cartoonish, and casual. Internally, the Zynga Los Angeles team thought about this game as “CityVille meets Risk.”

The blending of combat and casual is a big risk for Zynga, since many of its 250 million fans are middle-aged women who may not be a natural target audience for a game where you lob an artillery round at a good friend. 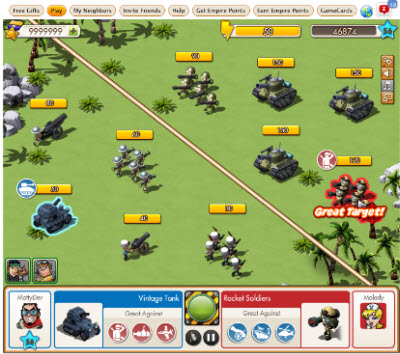 But if the game catches on, it could reach a much bigger audience than a hardcore game would typically get. The combat strategy element will address the tastes of hardcore gamers as well as many mainstream gamers who have complained that there isn’t enough game play in Zynga’s other games, such as FarmVille.

“The game translates what makes traditional games fun into the Zynga style,” said Amer Ajami, executive producer of the game at the Zynga Los Angeles studio.

Hardcore gamers on Facebook are a relatively untapped market, served only by a few game companies such as Kabam. But Kabam, which raised $85 million last week, has discovered that those hardcore gamers are willing to spend a lot of money in each game. That may be what drew Zynga to expand into this part of the market. 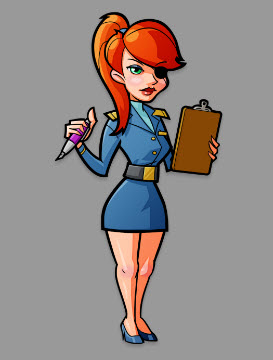 Ajami said his team, which is made up of a number of PC game veterans, built the game as a fun combat strategy game, but also tailored it for Zynga’s broad market of mass market casual players on Facebook. This is his team’s first launch. The game isn’t a huge time sink like many combat games, since you don’t have to micro-manage your resources and combat units. Most Zynga games are played for 10 minutes at a time, and Empires & Allies is no different.

“It blends hardcore game mechanics with CityVille-like mechanics of building and maintaining your empire,” Ajami said.

Unlike most of Zynga’s other games, this title has a storyline and more than 30 characters who help make the experience more engaging. Scarlett, pictured right, shows you how to you rebuild your island paradise after the evil tyrant Raven attacks it and leaves it in ruins.

Your job in the single-player campaign is to rebuild your forces and take a total of 15 islands. You can enlist your friends to help you along the way.

And when you attack, the game actually breaks into a combat scene, with your forces on one side and the enemy’s on the other. You can pick which unit will fire at an enemy target. You wait for the result, and then the enemy fires back. At some point, a winner is determ 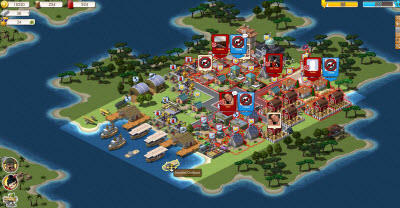 ined. On a strategic map, you can see how much progress you have made in the campaign.

The game is also billed as the “most social” game that Zynga has built. You can enlist your friends and designate them as either friends or enemies. Your enemy friends can attack your island and take over buildings that you own. If you want to extract resources from buildings that you have lost to your attackers, you can do so. But it costs you extra energy points to do so. During battles, hardcore gamers may discover that there are tactics they can use to help tip the odds in their favor.

Your friends can help defend you against attacks, or you can defend yourself. The game is free-to-play, like Zynga’s other games. You can play for free, but you can speed up your production or instantly produce army units if you pay real money for virtual currency. You can also buy power-ups that help turn the tide of battle in your favor. 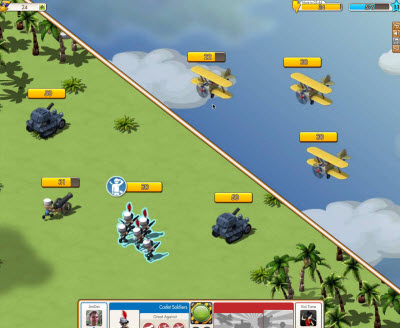 Ajami formerly worked on the Command & Conquer real-time combat strategy games at Electronic Arts. Others on his team worked at Activision Blizzard or Web 2.0 companies. The game engine is a combination of “shared tools” within Zynga and some of the LA team’s own work.

“Given our backgrounds, these games are in our DNA,” Ajami said. “We love to play them, and we had to distill fun game play mechanics to the simplest level. We removed the rote mechanics and tried to make the game more fun.”

Ajami said the team tried out different art styles, but gravitated to the cartoon style early on. That may be one of the most critical decisions the team made in this game. The game is available on June 1 in 12 different languages — English, French, Italian, German, Spanish, Portuguese, Malaysian, Indonesian, Chinese, Norwegian, and Turkish. So far, only Zynga employees have played it.