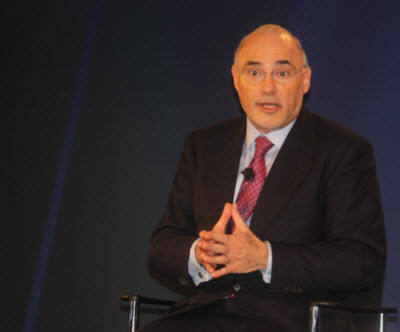 Hewlett Packard has ambitious plans for the webOS operating system that it acquired with Palm — in fact, president and chief executive Léo Apotheker said today that those plans aren’t limited to HP devices.

“WebOS will be more than just running inside or on top a particular piece of hardware that HP would make,” said Apotheker, who was speaking at the D9 conference in Rancho Palos Verdes, Calif.

He didn’t announce any specific deals, but he said there’s a broad swath of companies who might want to use webOS, such as appliance-makers. Enterprise companies and small businesses might also want to license a version of webOS that can run behind their corporate firewall.

But what about a company that competes directly with HP? Tech blogger Joshua Topolsky asked: If smartphone maker HTC wanted to build a webOS phone, would HP allow it?

“That is certainly something we would entertain,” Apotheker said.