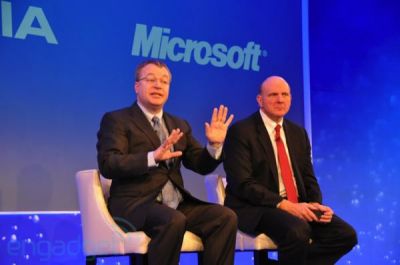 Today on the rumor mill: Microsoft may be considering spending a hefty $19 billion for Nokia’s smartphone business, according to renowned mobile industry scoop hound Eldar Murtazin.

Right now all we have to go on is Murtazin’s tweet: “One small software company decided last week that they could spent 19 bln USD to buy a part of small phone vendor. Thats it.” He’s clearly hinting at a deal between Microsoft and Nokia, something that he’s been reporting will happen for weeks now. (Pictured right, Nokia CEO Stephen Elop, Microsoft CEO Steve Ballmer.)

If the rumor does end up being true, Microsoft would be looking to acquire Nokia’s “Smart Devices” division, which houses all of the company’s smartphone operations. Nokia also has a “Mobile Phones” division, but that’s entirely focused on lower-end dumb phones.

Nokia communications director Mark Squires responded to Murtazin’s earlier report in a surprisingly direct way on Twitter: “We typically don’t comment on rumors. But we have to say that Eldar’s rumors are getting obviously less accurate with every passing moment,” he wrote.

It’s certainly not out of the question for Microsoft to snag a portion of Nokia, but personally I don’t think it makes sense anytime soon. With Nokia now focusing on making Windows Phone devices (a deal rumored to be worth $1 billion), there’s not much for Microsoft to gain by buying the company at the moment. Microsoft would be better off saving its cash and letting Nokia pump out devices under its direction.

Microsoft just recently spent $8.5 billion on Skype, which was also the company’s biggest acquisition so far. It seems like a stretch that Microsoft would be willing to throw down another $19 billion so soon.

Update: Elop also commented on the rumor at the D9 conference today: “There has been absolutely no discussion. The rumors are baseless.”